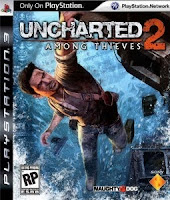 It's hard to say this about the first game I completed in 2010, especially since it was considered by many 2009's Game of the Year. Truthfully, I felt unsatisfied with it at the end.

Now this is weird because I almost agree with all the praise it is given by various gaming outlets. It is a definite experience with moments that are simply amazing. Whether it be the character interaction, the stunning settings or the countless action-packed scenarios, the story mode is an action movie equivalent that can leave a feeling of "just one more chapter". Add in the fact that there is a pretty solid multiplayer and co-op aspect to the game, it would seem that you can't go wrong with the title.

But for some reason it didn't sit well with me. While I especially enjoyed the climbing mechanics, it just made me want to play a free roaming game where I could do that all over a city. While the multiplayer was a "Man I rather be playing something else, but holy crap I just pulled someone over this ledge, holy crap I just kicked someone from climbing into my camping spot, just one more round until I level up, where did the last hour and a half go" type of deal, I would have preferred to play something else. The stealth parts seemed odd due to somewhat inconsistent guards. Finally, the shooting was hit or miss (zing), with head shot detection being slightly off and enemies annoyingly prone to soaking up quite a few bullets. Granted, this can all just be nitpicking on my part.

I don't get it. There are a lot things I really liked about the game and I can see why many declared it their game of the year. It's just that during my playthrough of the game's modes, there was a feeling that I wanted to play something else that used similar mechanics. This was often overshadowed by some of the story's key moments, but when it wasn't delivering those, that boredom emerged again. I'm really hoping that Nathan Drake's next outing will grab more of my attention.