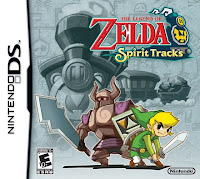 As an original Zelda fan I can say that this game was awesome. A bit about the story… This game’s Link is a descendant of the Link from Phantom Hourglass (an older DS title). I won’t say many details because I don’t wanna spoil it. Anyways, Link is some nobody who’s training to be an engineer and starts the game off by trying to get his engineering license. In order to receive his diploma he has to go to Princess Zelda in Hyrule Castle. Upon arrival some goon who has power in Hyrule turns on Zelda and captures her body to resurrect some Demon King. So Zelda’s Spirit comes out and she asks Link for his assistance and guides him on his adventure.

So I finally finished travelling through the train tracks of Hyrule. Just when I thought Phantom Hourglass would have been the last Zelda game to be good on DS, The Spirit Tracks comes out. At first I thought this game was kind of annoying because of the travelling system. In the Phantom Hourglass we travelled by boat on the ocean so I could draw my route to various islands and just let the ship sail. In the Spirit Tracks we’re travelling by train, so there are certain routes to take and avoid because of these stupid annoying possessed bomb train things that just ride in loops waiting for you. The travelling also takes a long time, but I kinda saw it coming since the developers had planned it that way and since it is a DS game I can pretty much take it anywhere I want.

Next, the actual dungeons of the game were very awesome and somewhat challenging at times with exception to one, the friggin Spirit Tower, a place where you gotta travel to after completing each temple. The reason why this place pissed me off was because after you control a Phantom, it becomes a pain in the ass to make follow you around. It’s even worse at the end of the game, which I won’t spoil. My favorite temple was by far the Snow Temple, because once you obtain the special item of the cave, it becomes really fun to kill enemies and get through the dungeon faster.

The items and weapons obtained in this game actually make the game play much better. One item that I am going to talk about is the Spirit Flute. Like in previous Zelda games there is a musical feature where you learn different songs to play in order to activate certain effects. In this game the Spirit Flute is an instrument that the player actually has to play by blowing into the Mic of the DS. It can be extremely difficult at times but actually is a really cool feature! Of course this game’s songs are in no comparison to The Legend of Zelda: Ocarina of Time on the Nintendo 64.

This game also makes great use of the DS’s graphics and dual screen feature. Cut scenes were nice and smooth and pretty damn cool sometimes. I also really enjoyed how every dungeon’s boss had its own unique way of using the touch screen as well whether it was to aim or rapidly scratch when performing a barrage of sword slashes (thankfully I have my screen protectors) The graphics of this DS game looks like what we’ve seen on the GameCube which actually surprised me.

Anyways, this is a game that I would highly recommend to anyone who’s a fan of Zelda games. You do not need to play the previous title Legend of Zelda: The Phantom Hourglass prior to this one in order to understand it which makes it a great buy (or download :P) for anyone. The game is quite challenging and at certain points will take a great amount of time to complete.