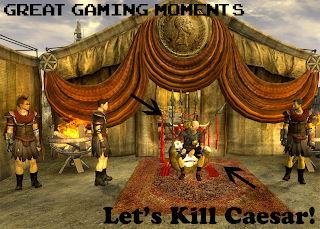 As you may or may not know, Saturday Morning Arcade was built around the premise of recording gaming experiences had throughout the year. The hope was that it would assist in coming up with game of the year lists and whatnot once December rolled around. Great in concept, but not so much in practice.

While trying to list the better games of the year is quite the task in itself, one aspect that seemed even more intriguing was the idea of listing the year's better gaming moments. There are countless times throughout the year where we tell our friends about "this thing" that happened. Whether it be due to a glitch, something unintentional, or a scripted event, we experience these moments where we need to tell others of our escapades.

These entries are doing just that: documenting our endeavors in hopes of fulfilling that weird primal urge to tell a personal story. Who knows, maybe there will be enough entries at the end of the year to generate a list. Until then however, there's always our great gaming moments.

First up in 2011? Killing one of Fallout New Vegas' main antagonists of course.

Warning: A lot of text ahead. For the basic gist of my story, scroll down until just after the second picture and start reading from there (I also bolded the first sentence). I'm also aware how weird this makes me look and how it can be used in an argument in favor of the negatives of video game playing. Oh well.

I just want to get this out of the way: there might be spoilers, so be aware of that. Maybe you're like me and you don't want even the tiniest of details ruined for you. In that case, this may not be the place for you. Once you've finished the game, you're more than welcome to return.

In Fallout New Vegas, players soon become aware that there is a much bigger picture being painted around the central character, one that goes beyond their quest for answers and revenge. It seems that the Wasteland is moments away from an all out war between two factions - The New California Republic and the Caesar's Legion.

As the game progresses, players learn that Caesar is more of the evil dictator type. The type of person who would order his men to hang victims from telephone poles, make them participate in horrifying games, kill the men of the house and put the women into slavery. Violent and misogynistic, what's not to love. 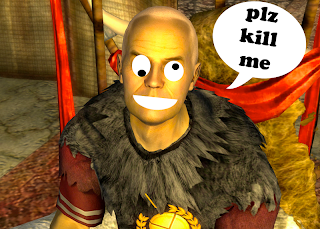 Around the 45 hour mark or so, my character's presence was requested by Caesar himself. After receiving the invitation from one of his minions (and being granted amnesty for my crimes against the legion), I knew that the time had come.

Knowing that Caesar's fortress would be crawling with his legionnaires, I stocked up on Sniper and Assault Rifle ammo. With Veronica and Ed-E by my side, we ventured off to the Fort, to meet with the man himself.

Once there, and the noise signifying that the gates were closed was heard, I took the time to explore the area. It was pretty much how I envisioned the camp to look: dirty, crawling with his henchmen and the occasional female slave awkwardly walking around.

As I continued to make my way to Caesar's tent, I noticed an arena in the middle of camp. The guard told me this was where young legionnaires came to prove their worth, or where slaves were pitted against one another for their entertainment. He made one thing clear, there would always be death within the arena.

Once my explorations were complete, I entered Caesar's tent. I had finally come face to face with Caesar, though killing him there and then was out of the question - you're stripped of your weapons the moment you enter his territory.

We engaged in Fallout conversation, and it seemed he wasn't too happy to see my character. He asked what they were doing there and went to on list all the crimes I had actually committed against the Legion. This was a well appreciated touch and a faint smugness soon came over me as he began to list a few of my adventures throughout the Wasteland.

Though this would probably have been a good time for his men to kill me off, Caesar wanted me to do some work. He wanted me to travel to an on site bunker and destroy whatever I found inside. Seeing as there was nothing else I could do here which wouldn't result in my head being shot off, I complied.

Once I reached the bunker I was given back my weapons. Seeing as I wasn't Legion scum, the opportunity to liberate the entire fort presented itself. After equipping the 1st Recon Beret and the All American unique Assault Rifle, Veronica, Ed-E and myself proceeded to gun the entire camp down. The problem the NCR was having with these guys I will never know. 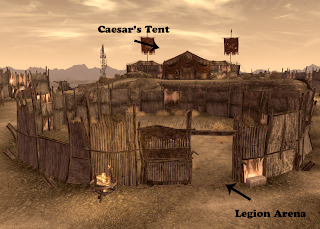 After every Legion member in Caesar's camp was dead, I set my sights to his tent. Once inside, I realized that Caesar had a lot of guards with him - guards with really high damage resistance. In the number of scenarios that took place, I found Caesar dying in the middle of the fight, sometimes by one of my stray bullets, sometimes to Veronica's punches and sometimes to Ed-E's laser.

Now, being the weird gamer I am, none of these felt satisfying in the slightest, nor how I wanted him to go out in my Fallout story. The next reload I told Veronica and Ed-E to stay hidden in the Bunker. Once I re-entered the tent and killed the first two guards, I quickly backed out of there. I figured that I could game the system, heal up then reenter - repeating this process until it was just Caesar and I left.

However the moment I backed out, Caesar and his boys did the same and continued their chase. The next couple of minutes turned into me running around the camp backwards, shooting at my chasers. Eventually I was able to pick off his guards and it was just Caesar and I left.

The opportunity to shoot Caesar in the head with the Mysterious Magnum was finally here. Well, it would be if I didn't notice we were in front of the Legion camp arena. I walked in, and soon Caesar did too. Realizing that Caesar used a fist based weapon, I knew how I wanted to kill him. Fist fight. Right here in the arena.

I soon equipped a business suit, the top hat I swiped from The Ultra Luxe's Mortimer and the pair of Golden Boxing Gloves courtesy of the Lucky 38. If Caesar wanted a boxing match, I was going to do it pure gentlemen style.

Granted, I basically had next to nothing put into my Unarmed stats, so of course I shot him a bit to even things up. What came next was awesome, and probably the reason why I put so much time into writing this up. Caesar and I fought, exchanging blows and blocks until I was able to scribe counter him and knock him out (this was also the time I realized how enjoyable unarmed fighting can be in New Vegas, I will definitely consider a proper build in a future playthrough).

And it was done. I had finally killed Caesar in the most satisfying way I could have ever imagined. This was basically the quintessential Fallout moment for me. A testament of the game's random, do whatever you want nature. And I honestly couldn't ask for more.

And that, ladies and gentlemen, was my first great gaming moment of 2011. 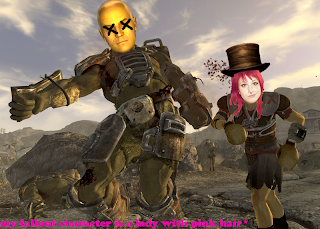 Afterward, I punched the body a few times then finally shot it with my magnum (poetic, right?). As a result, Caesar's head flew off completely. Wanting to further humiliate the virtual and clearly not real Legion, I took his head and brought in to the eatery area where I proceed to throw it into a pot, and put the pot over a bonfire. I told you this would make me look weird. 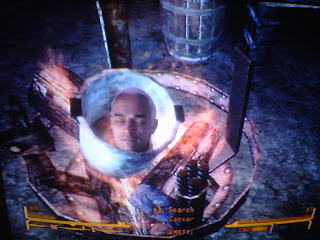