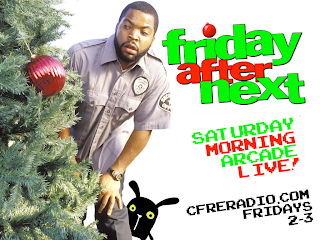 Remember a few weeks ago how I said our third episode sounded like a train wreck? Well, if that was a train wreck, the last show we did was a train wreck that collapsed over a busy highway and then conveniently had a plane crash into it. With a cherry on top.

For those that don't know, I also have an alternative hip hop show on the lovely CFRE network called Truth Bombs. After a month long hiatus, I was dying to get back into the booth. Thus, last Friday we had an impromptu Truth Bombs talk episode featuring Saturday Morning Arcade as well some of our friends. Needless to say no structure, no real solid topics, and more bodies than microphones, it wasn't the most enjoyable thing to listen to. It turned into a Saturday Morning Arcade show half way through, and even then things didn't get any better. Will you ever get to hear it? Who knows!

Randomly awkward tangents aside, I just wanted to let everyone know that there's going to be a change in the Saturday Morning Arcade recording schedule. As you may know, the SMA team is composed of University students, students with schedules that change every semester. Due to some complications with classes, Saturday Morning Arcade will now be broadcasted live every Friday from 2 - 3 via CFREradio.com or 91.9fm near the University of Toronto Mississauga Campus. For those that want to check out Truth Bombs, it will be taking over the Monday, 1 - 2 timeslot. Regardless of the change, SMA episodes will still be available for download a couple of days after recording.

That's basically all the housekeeping for now. Stay on the lookout for some more stuff from us in terms of content, and remember to tune in every Friday!