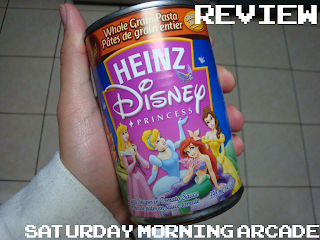 Now, Saturday Morning Arcade is both a video game blog and a video game talk radio how. However, loyal listeners to Saturday Morning Arcade LIVE know that we also have a soft spot in our hearts for Disney Princesses. Sure, while we get our kicks exploring space, causing dance floors to evacuate and making characters in tights fight each other, there's nothing better than to put on an old VHS tape and relive some childhood memories… in the background as we lift manly weights and comb our manly handlebar moustaches. While we stand on broken glass. Broken glass on fire.

Since we're so vocal on the subject, you could guess how stoked I was browsing the local grocery story the other day only to find Heinz Disney Princess canned pasta on sale. Seeing as it's reading week and content on the blog will be scarcer than usual, I thought that this would be a perfect opportunity to put my review skills to work. Sure, last week saw the release of one of, if not the, biggest fighting game releases of the year, but you can read about that throughout the web. Where else can you find dedicated coverage of easy to prepare pasta in a can that vaguely resemble Disney Characters marketed to female children?

The label boasts Heinz Disney Princess as "Pasta Shapes in Tomato Sauce" as well as "Whole Grain Pasta" which is "Great Tasting!". That's all well and good, but you already know what you're getting yourself into. It's pasta in a can, you can get this in a number of different variations. You're not simply purchasing pasta in a can for the sake of it being pasta in a can. You're purchasing it because of the theme on the label, which ultimately determines the pasta shapes included inside.

The theme here is explicitly stated: Disney Princess. The pasta inside this can will resemble Disney Princesses. Before we get to that however, let's take a look at the cover. The four prominent princesses on display are Princess Aurora (Sleeping Beauty), Cinderella (Cinderella), Ariel (The Little Mermaid) and Belle (Beauty and the Beast). The princesses chosen to grace the label should not really come as a surprise. They are pretty much the biggest leading ladies that Disney has to offer and are probably the most recognizable to the children that will ultimately ask their parents to buy it for them. 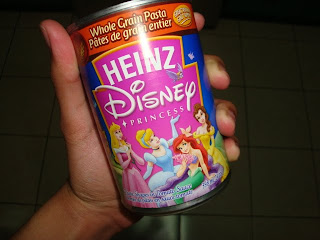 My grip is that the choices are a little too obvious. Yes, I admit these are the biggest Disney Princesses, but frankly it's like they took the easy way out. The big ass Disney logo should be enough to sell these cans, but they further played it safe showing that the all mightily dollar is more important than taking risks. Where are the Snow Whites? The Jasmines? The Mulans? The lady from The Frog Princess? Too ethically diverse for you? Not trying to pull the race card or anything, but maybe a little more colour would have been appreciated if you know what I mean. At least Ariel is there to appeal to the furries. Half furries? Does she even count? I mean she's a fish. Half fish. Maybe some people are into that. I don't know.

Plus what's the deal with there being no Alice there? By far, Alice is the most glorious character to ever be adapted by Disney. This isn't bias opinion, this is fact. If Heinz were to have put Alice on the cover, BAM! Three more cans instantly sold, instead of me buying the Scooby Doo and Sponge Bob variations as well. Alice was all about imagination, and to pick four of the most obvious princesses takes no imagination at all.

There's also a giant orange stripe around the top to inform you that this is whole grain pasta, possibly to tell parents that this is somehow nutritious and they should feel good about buying this for their kids. You know what else had this marker on their cover? Whole Grain Corn Pops. Here's a bonus quick review: Those tasted terrible. Same great taste my butt. Overall the cover is passable, albeit a little on the boring side. I suggest that Heinz re-brand the label to include a more diverse cast. Or just Alice. Alice all day. 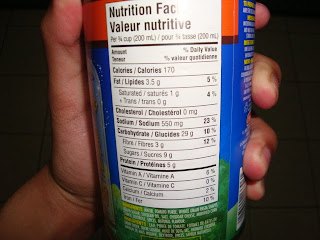 The Nutrition Facts for the pasta are typical of your canned pasta. It actually has more Vitamin A and Iron than I expected, but that's more so because I assume these things have nothing of the sort. No trans fat at least. Then again, what does these days. Things with cheese usually. Actually the ingredients say there's cheddar cheese within this can, but you can't really taste it. More on that later.

Really though, who comes to these things for Nutrition anyway. You get what you pay for and what you get are fun shaped pasta pieces. Initially looking at the list of what's found in the can, they seem to follow the trend of lackluster obvious picks that resemble what is found on the cover. Mostly found on the cover. To my surprise the shapes only feature two of the four star princesses. Ariel and Cinderella are represented as well as Snow White. The remaining pieces are loosely princess related - a tiara, Cinderella's glass slipper and a castle of sorts. 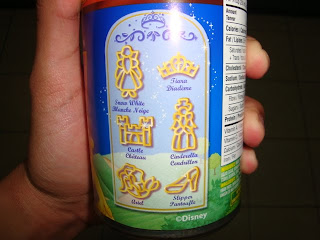 Snow White earns the list some bonus points for variety and frankly being one the better princesses (again, fact, not bias opinion). However, it loses much more for including those objects. When two of your main label princesses aren't represented in pasta shapes, you're doing something wrong. Plus why does Cinderella AND her glass slipper get their own shapes? Might as well call this Cinderella's Pasta in a Can featuring Snow White and Ariel, since that's basically what you're getting due the tiara and castle being so general they can easily apply to Cinderella as well.

As far as the shapes go, let's take a look. By far the best one out of the six is Ariel's, as in some weird messed up looking way, it kind of looks like her. Hers was the only shape that I could look at and say, yup, that sure is Ariel. I appreciate when pasta shapes are elaborate enough to truly capture what they are trying to represent, and pretty much this is the only shape of the six worth appreciating. 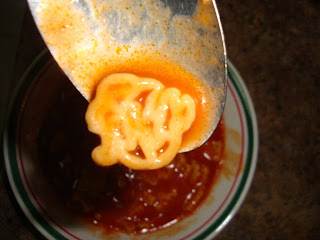 My real grip is with Snow White. If I couldn't have Alice, at least I could have Snow White right? Wrong. Look at that shape, how does that even resemble Snow White. If anything it's more akin to a fairy with wings and all. To call this Snow White is a joke, and all I think of when I look at it is a Fairy Godmother. What else comes to mind when I think of a Fairy Godmother? Cinderella. The Cinderella representation is astonishing. 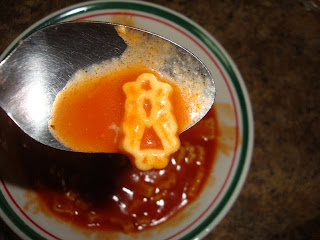 Speaking of Cinderella, take a look at it. Maybe the princess needs all the representation she can get, since her pasta shape looks nothing like her. At least Snow White can pass as a fairygodmother, Cinderella looks like some amazonian shrine artifact. Seriously, what the hell is this suppose to be. Even the label doesn't do the shape any favours since I get a Mary Poppins vibe due to the head area looking like a hat. This is the worst shape of the six. 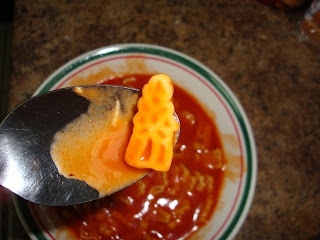 The castle, tiara, and glass shoe are give and take. They're not bad looking, but then again they're such staples in these worlds that who honestly cares. Plus judging by scale, the tiara and the slipper are smaller compared to the rest of the shapes. This feels like a cop out since it feels like you're getting less bang for your buck. As I stated earlier, I want big elaborate shapes. Not dinky little ones. The castle is passable, but it's a castle, not a princess. 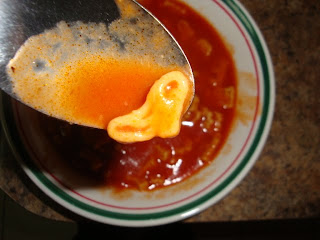 My problem is that when I buy the Sponge Bob pasta in a can, not only do I get all the characters in big pasta shape form, but they actually resemble them as well. Same with the Scooby Doo one, all characters, all pasta. Now when I get to Disney Princesses, not only do I not get all Princesses, but I get some dinky related items that probably won't fill you up at the end of the day. Seriously, look how small they are. 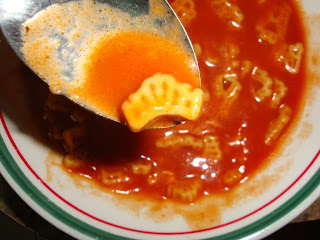 Here's a solid lineup for your pasta shapes: Alice, Ariel, Aurora, Bell, Cinderella and Snow White as shapes that actually resemble them. Or maybe four variations of Alice, Cheshire and a giant Top Hat. There, 10/10 lineup. Forget the actual objects. People are coming to this for princesses, not clothing accessories.

Aesthetics aside, pasta in a can is pretty easy to prepare. After opening it, dump it in a bowl and microwave for a minute and a half, stirring every now and then. I like to stir every 30 seconds, just so that everything is nice and warm. Taste wise, the pasta has that hint of grain taste, which is stated on the label. The tomato sauce is a tad thinner than the pasta sauces I'm use to having but is actually has an alright taste. I was actually surprised at how sweet the sauce was, which made me think that there was more sugar included than needed. Other than that it's typically everything you'd expect from pasta in a can. Seriously, who comes to these things for taste. 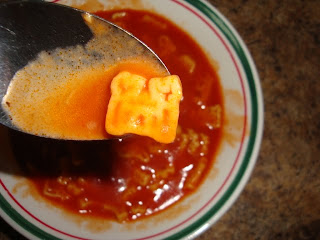 Overall, Disney Princess pasta in a can was everything I thought it'd be. An OK tasting product perfect for those late nights where you can't be bothered to make anything of actual taste. The disappointment lies in the design and marketing of the product. With a lackluster selection of both label princesses and pasta shapes, you could do far better in terms of pasta in a can choice. 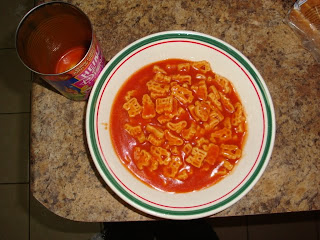