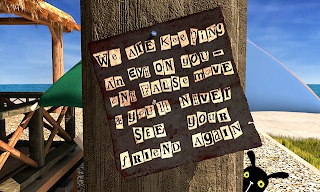 As I began to write this post, I realized two things. One, it's becoming really difficult trying to figure out a new way to introduce these posts every week. And two, we've had a lot of so called train wreck episodes. This is pretty much the third time I'm saying that it was one of those weeks for last Friday's broadcast. What that says about this podcast and its quality, I do not know - other than it is awesome.

Last week Julian and I try to hold it down for the first ten minutes with little success, before we are finally joined by Mark and Rakush. Soon after, CFRE's newest DJ Jyll and Magnetic Tape host Wajahat sit in, occasionally joining the conversation every now and then. Remember episode 5 and how there were more bodies than microphones? And the audio levels were all weird? Yeah that totally happened... again. You can listen to our party here. Sorry.

In this episode we talk about PC games from the 90s, Moe (pronounced [mo.e]), open world crime games, of course Marvel vs Capcom 3, Halo war stories and for the first time, answer YOUR listener questions! Well, before I realize how depressing this whole thing is and practically poop on you loyal listeners. Sorry again.

Speaking of first time evers, last Monday we had a very special Saturday Morning Arcade where we mostly discussed a specialty topic: in this case, the Fallout franchise. If you weren't there to catch Julian, myself and SMA friend Patrick, don't fret! It'll be online next Monday. Probably.

Join us again this Friday for all this magic LIVE, 2 - 3pm est via CFRE Radio or 91.9fm near the UTM campus. Before then, you should totally e-mail any questions, comments and concerns to saturdaymorningarcade@gmail.com. I promise to be nicer. Probably.