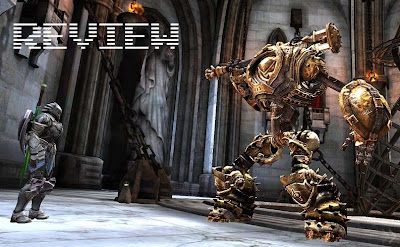 There aren’t many original games available on iTunes that offer a great game to as wide an audience as Infinity Blade does. At the same time, the games strongest features are also responsible for the games biggest weaknesses.

Before anything, this is a game on an iPhone and the iPad. These systems are not gaming power-horses and I cannot say the game should have done some things in a specific way, as it would not be fair.

Infinity Blade is a game that transcends the limitations of the “hardcore” and “casual” gamer. The story follows a family of warriors who must fight the nigh invincible God King and his legion of fighters called Titans. Don’t worry if you die easily against the God King, as the only way to truly defeat him is to play through several bloodlines or, in gaming terminology, grind through it (unless you are good, in which case...bravo!).

Take some time to look around the world. This is, by far, the best looking iPhone game ever made. The graphics can go up against some of the more successful titles from the XBOX 360 and Playstation 3. The details in the tower, mountains and enemies are stunning. The character design varies according to the equipment the player wears.

The weapon options are vast and players have to constantly upgrade them in order to level up at a quicker pace. This keeps the game balanced and fresh when it feels as though the endless cycle of going through the tower is repetitive. The game could do with more options for armours though.

The controls are simple but also effective. The player swipes a finger in any direction to swing their blades. An interactive HUD system lets players dodge enemy attacks and also counter with a power hit and magic spells. It never once intrudes upon the game itself.

With two of the most important parts of a game being done justice, this game should be one of the best experiences on the iPhone, however there are glaring issues which hold it down.

As I mentioned before, there is the case of extreme repetition. Grinding is not a foreign concept in Role Playing Games (RPG) as more times than not, that character will not survive for more than a few minutes at level one. Usually those games also give more options than one tower and virtually identical monsters with an updated arsenal with each new bloodline.

Most of the Titans look intimidating but facing them over and over again is repetitive and boring. At some points, there is a new Titan to fight but the options are still limited.

The game is linear and does not let the player move around. This is unfortunate as the world looks as phenomenal as it does and the player can only look at some of the scenery from a distance. I don’t however, want to imply that the game should be radically changed to do this, as an open world game would have different system requirements and would change the flow of this game entirely.

For gamers who are only looking for a quick fix during a bus ride, the linearity will be fine, as it gets you to the main point instead of fooling around with irrelevant things.

Chair Entertainment and Epic Games have taken a game that should be on a much more powerful system and made it work on the iPhone. There are flaws that experienced gamers might take notice of, but there are also the redeeming qualities should they wish to look past the problems.

Despite its flaws, Infinity Blade is a solid first step towards better gaming on the iPhone and iPod Touch. Hopefully future releases and imitators will look to fix some of the problems persistent with the game.

Infinity Blade has been out since December 21st 2010 and is available for the iPhone and iPad. It currently costs $5.99 and is only available on iTunes.