A Persona 3 Portable Afterthought: On My Grind 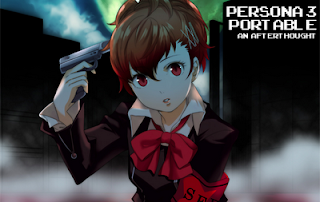 Wait, I'm posting something that ISN'T a BS wishlist or a link to one of our podcast episodes? Colour me shocked. Two weeks ago, after six months of not touching it, I finally finished Persona 3 Portable. For those unfamiliar with the title, it's the PSP release of the critically acclaimed Playstation 2 RPG. Just like Persona 4, I was left with some mixed emotions after I was brought back to the title screen. These feelings became even more mixed after I spent an hour or so watching various original P3 clips on Youtube. Here are some of those thoughts, posted in delicious blog form… nine months after the game's release. JUST LIKE A BABY.

Due to its length, I decided to break my impressions into different segments. For this entry, I talk about my experiences with the game's battle system and how my playstyle ultimately took away from my enjoyment.

Get your Fatlus jokes ready for after the jump.

Right off the bat, I played Persona 3 Portable incorrectly.

I'll admit that I was pretty late to the Persona party. Though the game series has had a presence amongst a few of my friends, both Persona 3 and 4 have never been titles that intrigued me enough to play. Like many, it wasn't until the Giant Bomb Persona 4 Endurance Run that I had actual reference regarding these games. Swallowing my "2 kool 4 dis" pride, I took the plunge and entered the world of P4. After over a hundred hours of gameplay, not only was I invested in the world presented to me, but it solidified itself as one of my favourite games of all time.

Mechanically, I loved how Persona 4 played. Accompanying the great social aspects of the game, the battle system was something that I actually found entertaining. I probably should stress this as it is the reason why I didn't feel the need to go back and play its predecessor. You are unable to directly control your party's actions in P3, a fact that was a huge deal breaker to myself. Though I have heard many express that P3 had a more engaging story than its successor, I felt content with my current and only experience with the series. 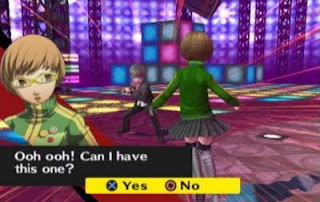 That is, until I found out about Persona 3 Portable. Billed as being another way to experience its story, P3P offered a list of impressive features. Among them included cameos from Persona 4, the ability to play as a female protagonist (yup, I know what you're thinking) and ability to directly control your party ala Persona 4. Upon seeing these marketing bullet points, I knew this was going to be the version for me, so much so that I actually bought a PSP to play this game (a used PSP 2000 via a "trade in 4 games get a PSP" promotion).

It's amazing how much a battle system matters in terms of the overall experience gathered from a Role Playing Game. It marks the actual segments of action based gameplay while breaking up the extremely long periods of dialogue and story. Its importance must be considered more so when you're the type of person who loves to grind it out, subjecting yourself to countless extra battles all in the name of over levelling your character. You may be at this hours on end, thus it should be found enjoyable in these saddest of times.

At some point throughout my RPG playing career, I developed the mentality that I needed to be overpowered when it came to boss fights. Whether it be Final Fantsy X-2, Tales of Symphonia or Persona 4, I needed to be five, ten levels above the boss - a feat that wasn't hard to accomplish as I genuinely found their battle systems fun. I admit though that this pursuit of omnipotence takes up an unreasonable amount of time. While playing P4, I found myself leaving my PS2 on for hours on end, coming back to it now and then to continue my grindfest. If I was feeling adventurous, I'd put on a podcast and dedicate an hour or two to solely grinding it out straight.

This is exactly the main reason why I believe Persona 3 Portable works. In it being portable, you are able to put the game to sleep at any time - and continue whenever you find some free time. These long periods of grind were broken up throughout the day, throughout the week. Any downtime I found I could easily bang out two or three battles and then continue on with my day. 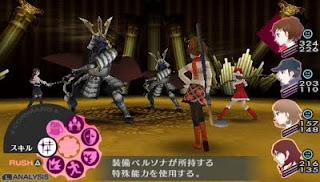 I've heard many people voice their distaste regarding the necessity of grinding in JRPGs. Such criticism usually revolves around how much time the genre asks for players to invest especially when it comes to the battle segments. In being portable, that investment is reduced a bit. Grinding becomes more bearable as the game revolves around the player's schedule as opposed to the other way around. The ability to stop in the middle of a dungeon and continue exactly where you left off hours or days later really changes the experience for the better I believe. Thus I found myself overgrinding even more due to this bite sized form.

As I progressed through the story, I went into each of the boss battles overpowered as a result of my bizarre play style. Countless hours of destroying various lackey monsters all led to the scripted encounters which, according to the game's context, the characters struggled with due to their opponents being quite powerful. The only problem was that I was so much stronger than the bosses and fights that normally should have lasted 10+ minutes were ending in only a handful of turns. My suspension of disbelief required to be suspended even further due to the frequency of my party speaking breathlessly after a boss battle where they lost little to no health. 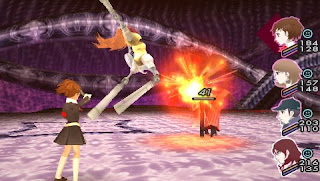 That little bit of contradictory is fine though. While the story didn't correspond with what I had just played, it isn't something to fret over as the developer's probably didn't expect players to make their teams Billy Badasses. This is where the problem I mentioned last paragraph comes in again. I was winning these fights so effortlessly that they were getting pretty boring. Part of the fun that comes from an RPG boss fight is the strategy that is required in order to defeat them. For some bosses, choosing the right move, the right spell, the right party member makes all the difference between victory and wasting the last ten, fifteen minutes.

All that becomes stripped away when you're over powered and suddenly you're placed in that terrifying boss role. The constant fear of being destroyed at any moment no longer exists in the back of your head. Instead the X button is pretty much reduced to a skip fight function, as any move you choose will take out a significant amount of life. The strategy was no longer there and it was all because of my countless hours of preparation. Theoretically all that grind time was wasted, as the pay off was just as boring as the work.

There was one addition to P3P that did throw me off, and in retrospect was a welcomed addition. Towards the end of the game, players have access to the Hall of Doors, an optional dungeon area which offers a handful of challenges to the player. It was to my surprise that to a degree, these fights actually scaled to the main character's level (or at least, they seemed to scale). After cheesing my way through most of the game, I was given fights that were seriously kicking my ass. I should have really appreciated this section due to the challenge it was presenting.

The key word being should have. All of a sudden my self-set easy mode was kicked up ten notches. Most of the strategies I developed internally throughout P3P and P4 were no longer cutting it. I found myself losing battles after thirty, forty minutes of gameplay. I want to say I lost one after a solid hour but I can't tell if that would be hyperbole. The point being is that some of these fights were extremely time consuming and in the end I'd come out of them with nothing. Touching upon a previous note, it's moments like these that make me see where people are coming from in terms of being done with the genre. The JRPGs of today are time consuming, and sometimes the payoff at the end doesn't justify it. Losing a battle after forty minutes may be poor player skill, but I still feel like part of that is due to questionable game design. 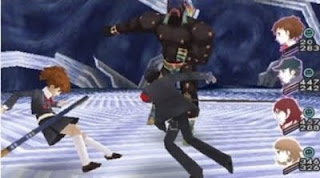 I guess that's why I overgrind. The need to make sure that I'm never in the position of losing a battle after gosh knows how long. Ironically, I probably invest more time playing in order to avoid that. The double edge sword continues as being overly more powerful than the bosses takes away the strategy, and in some respects, the fun from these fights.

In being portable, P3P is able to bypass a few of the things that makes JRPGs unappealing to the western gamers of today. The tediousness of grinding is reduced as players are able to stop and continue these gameplay portions to their hearts content. However, the fact that grinding still exists today is what really bums me out about the genre as a whole. If you don't do it enough, you're boned for the upcoming boss. On the other hand if you do it too much, you risk making the game too easy and less enjoyable. While P3P respects the players' time better than most RPGs, the genre itself needs to find a way to fully respect it.
Afterthought Features Persona 3 Portable Persona 4 Select