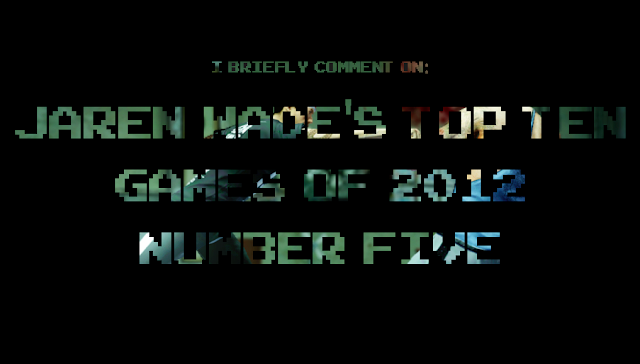 Let's make an arbitrary list of my favourite games of 2012. Here's number five.
I apologize in advance for separating my top ten entries into their own individual posts. While it may seem like a scheme to generate more page views (haha!), I assure you that it is for practicality's sake. Each entry spans multiple paragraphs and sorting them this way makes for easier viewing. I thank you for your consideration. 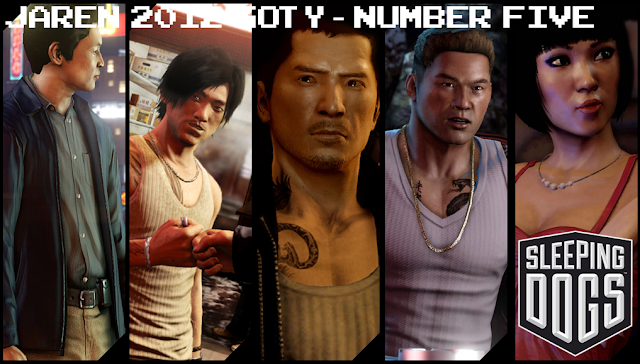 After playing through the first few hours of Sleeping Dogs, all I could think about was a message board post I had read almost a decade ago. It was prior to the release of True Crime: Streets of LA, and an optimistic fan posted something along the lines of “True Crime will redefine the open world genre. It’ll have the exploration of Grand Theft Auto, the shooting of SOCOM, the driving of Midnight Club and the fighting of Tekken”. Of course, Streets of LA failed to deliver that over exaggerated description. Neither could its sequel, True Crime: New York City.

Hence why everyone was skeptical back when the game was originally titled True Crime: Hong Kong. Even though an entirely different studio was behind it, the stigma from its predecessors was enough to make people wary. As its development marched on, its then publisher Activision cancelled the title. Half a year later, Square Enix picked up the publishing rights and released what is now known as Sleeping Dogs today.

And what Sleeping Dogs is today, I can only describe as a beautiful thing. As clichéd as that may sound, being able to witness Sleeping Dogs running on a PC had left me with that exact sentiment. I became speechless over the fact that an open world game could look this good and it made me heavily consider investing in a quality gaming PC. That was in passing however. My experience with Sleeping Dogs took place on the Playstation 3. Although it pales in comparison to its PC counterpart, the game itself still looks great. Its visual style is more realistic than Saints Row, but more “cartoony” than anything out of the Rockstar open world camp this generation. Plus it was really bright, something I can’t get enough of in my games.

Sleeping Dogs does look stunning, but it's also the closest a True Crime game has come to that message board post I had read oh so long ago. While to some, the shooting leaves a lot to be desired, I found it competent enough. The gunplay went with the B-Tier Hong Kong Crime Action movie feel the game was trying to capture. Although it wasn’t SOCOM, I found it a better fit than the shooting mechanics found in say, Stranglehold or Wet.

Then again, I only shot people when I had to. The game's combat truly shines when it utilizes hand-to-hang fighting. Essentially a Batman Arkham Asylum-Lite, Sleeping Dogs utilizes a “one button to strike, one button to counter” fighting system. Though at times it didn’t look as smooth as the title it draws inspiration from, the fights still look great in practice. Each hit looks downright brutal, and it felt like you were actually doing some damage. Mix in interactive environmental kills, and you really had a strong combat component. I cannot stress how fun it was to just throw down, so much so that I must have replayed the fight club side activities over a dozen times. Tekken it was not, but I personally found it a lot more fun.

Getting behind the wheel in Sleeping Dogs is one of the better examples of driving in open world sandbox games. Like the combat mechanics, I found myself playing through all of the street racing side activities; a portion I usually tend to avoid in these kinds of games. The story itself stays true to the atmosphere the game is trying to create, and presents a narrative that hangs with your typical HK action flick. The story beats are all there and the characters are all likeable in their own respects. At times it recognizes how campy it is and runs with it; something I really do appreciate.

Sleeping Dogs is an amazing package, and it makes me wonder what Activision didn’t see in the title. In many ways, I’m glad it no longer bears the title True Crime, as that would have done it an injustice. I do hope that Square Enix and developers United Front Games continue to explore this world, as it is one that I would love to return to.