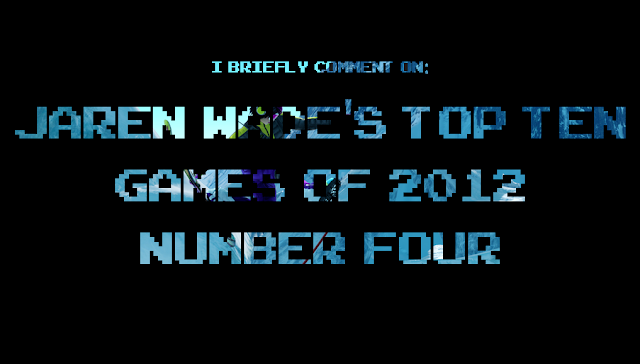 Let's make an arbitrary list of my favourite games of 2012. Here's number four.
I apologize in advance for separating my top ten entries into their own individual posts. While it may seem like a scheme to generate more page views (haha!), I assure you that it is for practicality's sake. Each entry spans multiple paragraphs and sorting them this way makes for easier viewing. I thank you for your consideration. 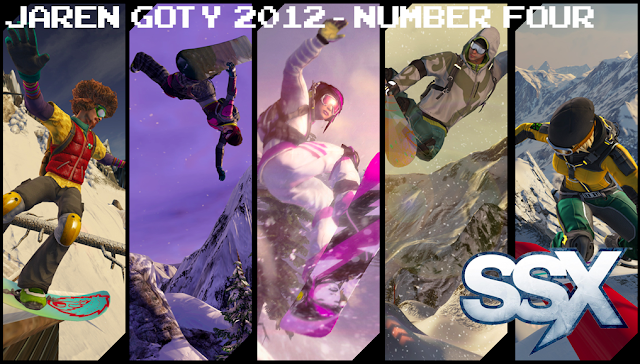 *Disclaimer: While five of my snowboard designs were selected by EA Sports and/or EA Canada to appear in SSX, the following post does not reflect or influence any sort of bias in favour of the game

I played the SSX franchise throughout my teens, though I never felt like I owned them. I don’t mean owned in the sense of being purchased, but owned as in being good at the game. A metric I would use to judge this fact was how many gold medals I would obtain during their end game set of events. Sure I was able to get golds in the beginning, but as I progressed, those golds soon turned to silvers, and those silvers then into bronze. Like fighting games, I couldn’t seem to grasp the main mechanics that made me actually viable at the game. A demoralizing fact since I considered myself pretty strong at the Activision brand of extreme sports titles.

It wasn’t until this year that I felt like I truly owned an SSX title. What poetry since SSX this year can be seen as a reboot of sorts for the franchise. It’s a title that appeared to have divided the SSX community. Half had said that it plays nothing like its predecessors while the other claims that it’s the best the series has ever been. I appear to fall in the latter as I have loved every moment I spent with it.

If I had to describe SSX, I would have to say that it’s Burnout on snow. The game reaches a ridiculous sense of speed, and moves smoothly as it is doing so. If speeding down a mountainside isn’t frantic enough, throw in the fact that there are big jumps with even bigger tricks to accompany them. While it may seem overwhelming at first, all this comes together to produce an entertaining experience. Being able to traverse at such a rapid pace while linking together tricks and trying to keep your combo meter in tact at the same time leads to a feeling of truly having a firm grasp at the game’s mechanics. Before I knew it, I was stringing together combos that spanned the entire course, finding the most point efficient lines and beating personal bests. I had finally owned SSX.

There was a single player mode, but I didn’t finish it. How can I have truly owned SSX if I hadn’t even reached my metric of evaluation? I found my new measuring device in the game’s multiplayer. Here you could compete in over 150 events, each with their own gold, silver and bronze standards. Those weren’t the scores I was after though. After each run your scores were compared to those of the players on your friends list. Before going into SSX I thought, "I would be last in every single one."

I was surprised to find that I was hanging in there with a lot of them. It was really the first experience I had with any sort of auto log mechanic, and it left a very strong impression on me. So much so that the overall experience is why I named it my favourite multiplayercomponent of 2012. Not only was I competing with myself for that perfect run, but competing with my friends list as well.

There were countless moments where I would have a single trick combo down the entire mountain, and mess up at the end. Normally this would call for a moment of frustration, but there’s something about SSX that encourages you to try again. I found myself restarting a lot, but I found myself having a lot of fun just trying to execute that perfect combo. The game felt good to play. And when I was all tricked out, there’s a comfortable experiencing in just coasting down a mountain listening to your own custom soundtrack. It’s been a while that I can say I found joy in an extreme sports game. SSX is an overall package, and one that I’m glad I actually own.