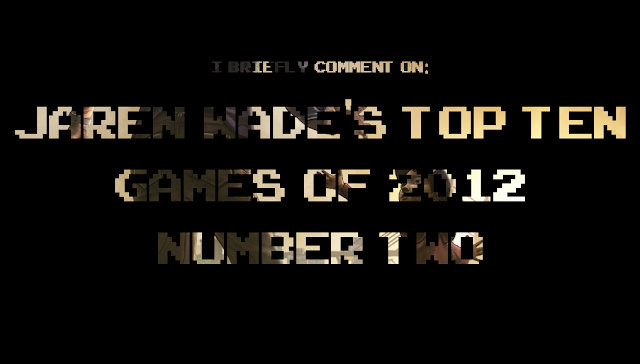 Let's make an arbitrary list of my favourite games of 2012. Here's number two.
I apologize in advance for separating my top ten entries into their own individual posts. While it may seem like a scheme to generate more page views (haha!), I assure you that it is for practicality's sake. Each entry spans multiple paragraphs and sorting them this way makes for easier viewing. I thank you for your consideration. 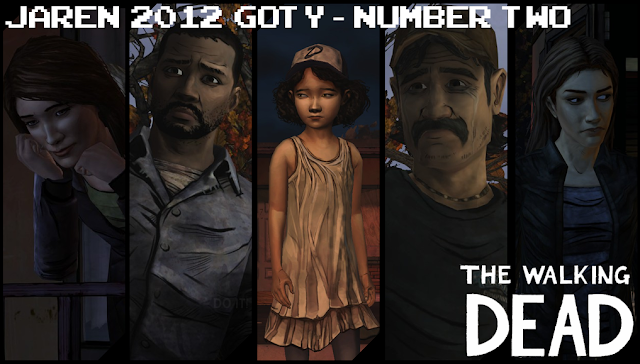 I never played adventure games growing up. I don’t have the same affinity towards the genre as many players do. I can fully acknowledge the role they played in the industry back in their golden days, but it’s a role I never experienced first hand. When it seemed like the genre was on its last few breaths, developers TellTale Games delivered its second wind and produced some quality titles over the past couple of years. They certainly have the pedigree, and I’m glad that it was one of their titles that properly introduced me to the genre.

That title of course is The Walking Dead. Zombies in the medium have become a touchy subject as of late. In the same time frame that Telltale Games led the reemergence of the adventure games, it seemed that zombies were finding their way into multiple titles and genres. While at a glance The Walking Dead appears to be another zombie title, playing through its five episodes makes you realize that they hardly are the game’s focal point. Like the Dead Rising series, they more so act as obstacles and nuisances that hinder the player from advancing the story.

The real draw for The Walking Dead is its characters and how they interact with the post apocalyptic world that surrounds them. In order to do so, the title presents its narrative through the adventure game formula. Players converse with different characters using dialogue trees, pick up items while they explore areas and solve any puzzles they come across. In addition, there are more traditional gameplay segments that have players defending against reanimated corpses. Though these aren’t The Walking Dead’s strongest sections, they certainly deliver a nice change of pace to the game’s overall flow.

But let’s face it, it wasn’t the gun wielding sections that had videogame enthusiasts buzzing, nor was it the actual adventure game fundamentals. The Walking Dead presents its players with a handful of characters, each with their own specific traits and motivations. With such strong personalities on display, it’s hard not to fall in love with the title’s cast. Alongside these characters are a number of different player choices. These decisions come in the form of the aforementioned dialogue trees, but can also pan out during instances where supplies and weapons are at play.

I mentioned in my Kingdomsof Amalur Reckoning post that the game marked the first instance where I was actually faced with a grey area dilemma. I had a moral decision where the choices weren’t so black and white. I struggled for a couple of minutes as I internally debated upon my answer. It was a rejuvenating take on a mechanic that has arguably grown stale in the medium today.

While Amalur only had a handful of those decisions, The Walking Dead presents them to you every couple of minutes. They come in all shapes and sizes, with their consequences ranging from how a character trusts you to who’s actually there at the end. If that wasn’t enough pressure, each choice has a time limit attached to them. If you don’t act fast enough, the game will decide for you – something I never wanted to happen.

Though I was faced with some of the most stress inducing situations throughout The Walking Dead, those were my decisions. Sure I was playing as protagonist Lee Everett, but I was ultimately the one making the difficult choices. It was my experience and to let the game take control for even one instance felt wrong, like a cop out of sorts.

But there were moments I was tempted to. I noted earlier that The Walking Dead successfully introduced me to an unfamiliar genre. That wasn’t the only thing the game did to me. It's second success came in the form of making me reevaluate how I played through a particular gaming mechanic.

Usually when faced with a moral decision, I’ve grown accustomed to just letting the game sit there while I mulled over everything that stood in front of me. Other times I would message a friend for advice then continue to weigh my options. In a gaming context, the whole world would suddenly stop – not matter how dire the circumstances were – and waited for me to make up my mind. Not to mention my character just stood there wide eyed, motionless as well. It broke the game’s narrative, but the title was designed in such a way that let me to do so. It begs the question: does this ruin the story telling experience? If it does, whose fault does it become? Is it the player's for waiting to decide for so long? Or is it the developers for allowing the ability to?

I digress. The Walking Dead didn’t allow me the luxury of texting my friends and asking for their input. Quite the opposite, the countdown timer barely allotted any time to breathe. Instead of exploring all my options, I was forced to trust my instincts with each choice and hope for the best. It was definitely a refreshing take on the mechanic, even though it’s wrapped up in this sense of panic.

Sometimes things played out in ways I didn’t expect, or downright didn’t like. In any other titles, I would have reloaded a save and remade my decision. With The Walking Dead however, replaying a segment for that reason felt wrong. While there were a handful of choices that I would have made differently if given the time to reflect, I still stand by the ones I made. It’s a genuine experience that I haven’t really found in gaming before, but one I certainly appreciate.

This is what make The Walking Dead so personal. Each decision you make it backed by your instincts, your experiences and your beliefs. Upon an episode’s completion, you are able to see what percentage of players chose during the episode’s major choices. It’s fascinating to see where you stand against everyone else. There were certainly moments where I felt I would be alongside the majority, only to find out that 10% of the game’s players made the same decision.

Half my enjoyment actually came from discussing the game with my peers afterwards. Each one of us applied our own justifications to each of the title’s moral choices. To discuss why we chose what we did led to some heated debates and new perspectives. Conversations that can only stem from an experience where thing's aren't so black and white. There are no wrong choices in The Walking Dead, mostly because everything in the world is already wrong to begin with.

I could go on and on about The Walking Dead. It’s one of the most compelling packages you could experience in 2012. The story beats that TellTale is able to hit is nothing short of astonishing, to the point where I’m still debating if I want more. Even though each player ultimately ends up in the same place, it's something that isn't apparent. Instead the player ends up with something that feels personalized, tailored specifically to whatever you put into it.