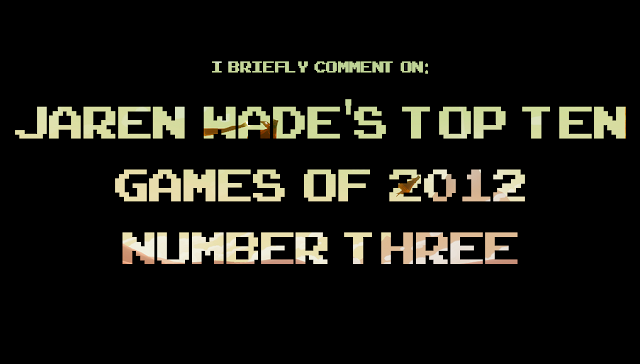 Let's make an arbitrary list of my favourite games of 2012. Here's number three.
I apologize in advance for separating my top ten entries into their own individual posts. While it may seem like a scheme to generate more page views (haha!), I assure you that it is for practicality's sake. Each entry spans multiple paragraphs and sorting them this way makes for easier viewing. I thank you for your consideration. 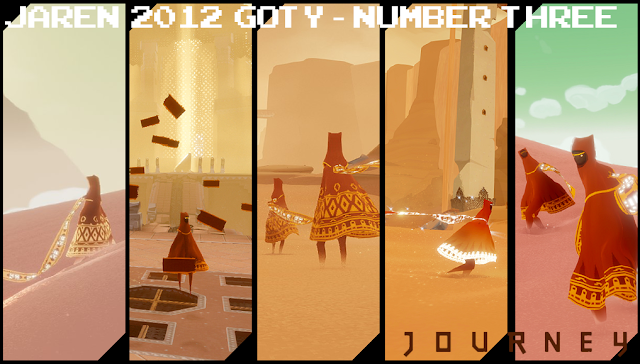 I’ve only played Journey twice. I’ve only finished Journey once. That's really where my problem lies. By no means is Journey a long game. If I had only continued on playing when I decided to stop that fateful day, I would have felt one of the greatest moments in my entire videogame playing career. As I currently stand, I associate the game with something that resembles tragedy and regret.

I went into Journey knowing very little about the game itself. I knew Art Game darlings That Game Company were its developers, you walked around a lot and it had videogame enthusiasts buzzing. For a game that was getting so many accolades, I had managed to avoid any information regarding what it actually presented. However, all the positive attention it was receiving was enough to get me to purchase the title day one.

Once I started the game up, I was thrown into a beautiful looking world engulfed by oranges, reds and yellows. I wasn’t greeted by any opening cinematic, nor any corresponding text giving context to the world around me. Instead I wandered around its sand covered dunes, and my mind raced as it tried to create some sort of purpose for the avatar I was controlling. As I progressed through the first section, I was presented with platforms that in avertedly introduced me to the game’s jumping mechanic. Journey didn’t explain that I had limited jumps; it was something I had to learn on my own. While I would normally become annoyed at games that failed to explain their gameplay systems, I appreciated Journey’s lack of direction. In my mind, this was a journey about discovery and that was exactly what I was doing.

I was greeted by a larger area when I stepped into the game’s second segment. I noticed that it was littered with a handful of glowing collectibles and I made obtaining them my new objective. I had no idea if I needed them to progress to the next level but it didn’t matter. On my way towards the first collectible, all I could think was that Journey was giving a new meaning to open world sandbox games. I chuckled and sighed at the same time.

As I began to walk towards my second collectible, something peculiar happened: another avatar walked up to me. I couldn’t tell if collecting the previous item triggered something, but something was definitely happening before me. I pressed on the circle button to produce a chirping sound from my avatar. They returned one as well, and then ran off. I began to give chase. They ended up leading me to a third collectible, accessed by jumping from a set of near by ruins. I watched as the stranger repeatedly jumped towards the item, but missed just as much. It was almost as if they were AI controlled, and their scripting was currently broken. This thought was strengthed as I was able to make the jump my first try. Afterwards, the stranger simply followed me. I shrugged it off and continued on into the next area.

My new friend and I ventured on, moving from new area to new area. Each time we were greeted with a new game play mechanic and a corresponding puzzle that utilized it. One moment we were flying through the air, the next we were sliding down a hill, and after that we were stealthily sneaking past dragon like creatures. In retrospect, the amount of variety that Journey possessed is staggering. While certain mechanics would reappear again, the game made sure never to present the same ones back to back.

Each area has a distinct look to match the game play variety. Different colour palettes and even camera angles are utilized throughout the game. They both work together to create a particular tone and atmosphere, each different from the last level. To top things off, the accompanying soundtrack is just as beautiful as the visuals. It completes the gorgeous package in front of you.

These weren’t the thoughts running through my mind as I played the game; quite the opposite actually. At the time I felt as if I was losing it. You see, I couldn’t figure out if my new friend was just an AI controlled NPC, or an actual living human being. I would find myself trying to communicate with them in someway. I would perform chirp patterns in hopes that they would mimic it; an attempt that I soon found useless as an AI could do that just as well as any human. I would stand idle for an extra couple of minutes, just to see if my partner would move on without me. They would continue to stick by my side however, and I would continue to question what was actually happening around me.

Then my mind started to race. What if this was a real person? I instantly thought that I didn’t want to slow them down. While I would normally explore every inch of a new area, I found myself pushing ahead, going directly to the puzzle that allowed us to progress. I didn’t want to hinder their experience at the cost of my own. I started to change how I normally enjoyed games on the off chance that this AI companion wasn’t actually artificial.

I started to lose it even more. Trying to figure out whom exactly I was playing Journey with triggered a chain reaction of thoughts, mixed with a rising bit of panic. I soon began to think about how I acted in relationships, how if I was changing myself too much to please people and, I kid you not, where my life was actually going. With every new level, the confusion regarding my co-op partner grew, and with that growth came a slew of life evaluating questions. Questions I couldn’t currently answer, or maybe even didn’t want to. Eventually it became too much. I decided to take a break.

A few hours later, I was talking to a friend. I was telling her that I was currently playing Journey, and experiencing a rollercoaster of emotion because of it. I told her about everything, from the gorgeous landscapes, to my peculiar partner and reaching the brink of madness. She laughed and told me “yeah, that multiplayer is wild. At the end you see a list of all the different players who have joined your game”.

After I had read that, I felt myself breaking in another way. At that moment, I knew Journey had no real story, thus there was nothing really to spoil. However, I felt as if the entire game was ruined for me. After spending an hour or so struggling to figure out if my companion was real or not, it was all sorted out in a matter of seconds. My friend saw nothing wrong with this, as it was apparently an advertised feature of the title. A feature I had managed to miss out on prior to Journey’s release.

I sat there and just stared at the words that inhabited my screen. “At the end you see a list of all the different players who have joined your game”. To me, this was Journey’s ending. This was the ending to the source of my questions, my panic, my madness. All I could think about was how amazing it would have been to discover that on my own, to see that list after an emotional hurricane. I could only imagine how satisfying it would have felt. Any desire I had to finish the game had vanished. I felt no need to power back on my Playstation as my Journey had abruptly come to an end right there.

I know it sounds like a lot of pretentious dribble, but Journey honestly broke me for a second. As much as Journey stands on its own in terms of presentation, and a variety of different, yet well implemented gameplay mechanics, that’s only part of the reason it’s one of my favourite games this year. The level of interpretation is staggering. Every person I talked to took away something different from the game. My personal take away was existential crisis; something that I can honestly say no other game has left me with.