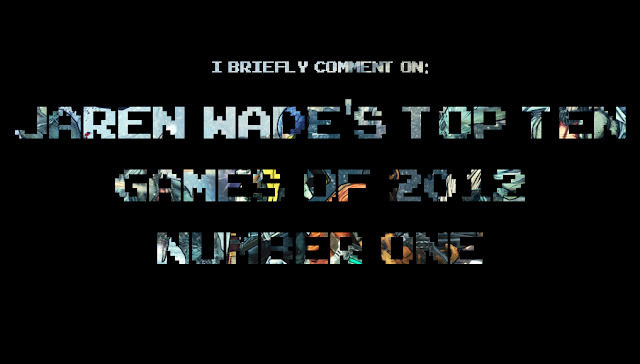 Let's make an arbitrary list of my favourite games of 2012. Here's number one.
I apologize in advance for separating my top ten entries into their own individual posts. While it may seem like a scheme to generate more page views (haha!), I assure you that it is for practicality's sake. Each entry spans multiple paragraphs and sorting them this way makes for easier viewing. I thank you for your consideration. 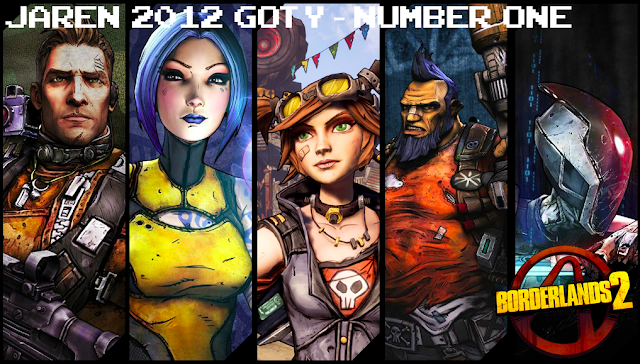 2009 saw the release of the original Borderlands. Even after its rebirth through a new art direction, it was a title I paid little attention to. The game only appeared on my radar when a friend of mine asked if I would be purchasing it a few weeks prior to its release. He told me that it was essentially Diablo with guns and that it had a strong co-op component. Even though I didn’t play the Diablo games growing up, I’m not one to pass up a solid multiplayer experience. I was sold on the title at that moment and bought the game day one. It was also $40. I feel the need to mention that.

As I played through Borderlands, I developed a strong sense of satisfaction. It was as if the title was made specifically for me. The game functioned like a single player MMO and provoked the same feelings I had when playing private server World of Warcraft with my friends. The character classes added a nice variety to the combat, the loot system was crazy addictive, the writing was entertaining at times and it just felt good to gun down enemies. I loved my time with it and couldn’t wait to enter the next world that developer Gearbox decided to bring the Borderlands to.

I mention all that because Borderlands 2 is more of the same. It still functions like a single player MMO, the loot system is still crazy addictive and it still feels good to shoot enemies in the face. If this is the case, then why is it my game of the year? Both The Walking Dead and Journey delivered unique experiences and were able to pull at my emotional strings; two traits that make them more than worthy to bear the crown. While arguably Persona 4 Arena and Dance Central 3 were both better games than Skullgirls and Double Fine HappyAction Theater, they didn’t make my top ten list because the latter two were able to deliver to me something more meaningful. All those things considered, why is the sequel to my 2009 game of the year my 2012 one when it’s still more of the same?

The same is still good. Every moment I spent with Borderlands 2, all I could think was “This game was made specifically for me”. The game finely tuned everything I loved about the original Borderlands and fixed most of its weaknesses. It added raid bosses that I actually wanted to farm for better loot. There was a better variety of enemies, each utilizing their own specific tactics. Player could partake in horde-based arenas that weren’t as tedious as the ones found in the original’s second DLC offering. Characters both new and old inhabited the world, and were actually fleshed out. I was able to explore a handful of exploits after I had completed the game three times. The list of improvements goes on. Oh, and it featured deeper player customization. I don’t know why a first person shooter needs player customization but it’s something I’ve wanted ever since the first and there it was.

I spent hours just exploring the world Gearbox has crafted; from simple opening chests to starting fights with anything that would retaliate. The biggest stand out however is the game’s writing. Borderlands’ original story was nothing special. It served its purpose by giving a context to the madness that unfolded parallel to it. For the sequel, Anthony Burch took the story telling helm. The end result is a solid narrative with a few twists that players can actually care about. What’s really impressive about the writing however is how funny it is. Character dialogue and in game gags range from immature to downright witty, but their comedic beats are timed perfectly. I found myself genuinely laughing throughout the game; something other titles have failed to do this year.

A month ago, I was sure that The Walking Dead was my 2012 Game of the Year. Then a few weeks later, I found myself in a hectic shoot out with a camp of bandits. I was throwing grenades that pulled in any near by enemies before it exploded, then shooting any survivors with a sub machine gun whose bullets corroded foes upon impact. My robot companion that I had summoned a minute before was busy thunder clapping anyone who dared approach it in between shooting lasers at flying aircrafts that circled above us. As the vehicles came crashing down and exploded beside us, a giant enemy took me out from behind. I began shooting at it as my lifebar was quickly depleting. Just when I thought all was lost, an already wounded enemy stumbled into the cross fire and was instantly killed. I was instantly revived and able to extract my revenge with a well placed shotgun burst to the giant’s skull.

That example of chaos was just one of the many stories I was able to experience amidst the Borderlands. And all that happened after farming a giant raid boss for an hour, with the hopes of it dropping a new customization head for my character. I cannot deny the amount of time I've invested within this game. It is a well put together package that improves upon its predecessor in every way imaginable and most importantly, just feels great to play. Frankly, it’s a package that feels like it was made for me - and that’s why I have no shame in making it my game of the year.