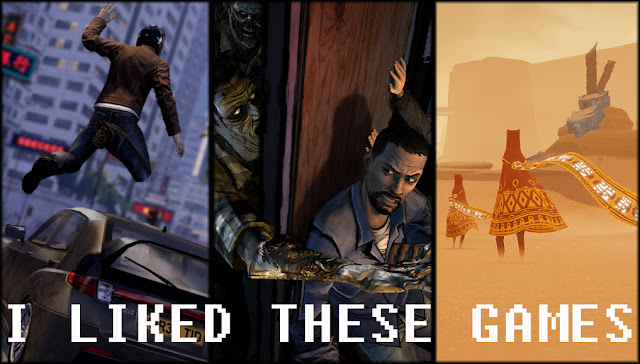 I didn't get a chance to complete many games this year, but there were a handful of games I couldn't move on from. This is a write-up about those games.

I don’t think a lot while playing games; at least not at the beginning. This is the main reason I felt like I didn’t play Journey in the potentially correct way. How could I think otherwise, when one of my best friends questions his life after playing Journey?

That being said, Journey was a visual masterpiece. The blending of the minimal terrain designs, with the vibrant colour palette and serene music made me feel calm during the 90 minutes I spent playing it. I also cannot recall a more perfect moment in 2012 gaming than gliding through the sand with the sun shining bright in the background. Words cannot properly describe that scene; it has to be experienced.

There were a couple of problems with Journey. The controls were simple, though most people should have no trouble getting used to them in a matter of minutes.It also only lasts for an hour or two. Of course, making a 20 hour epic out of a game like this also doesn’t make sense, but it’s difficult for me to suggest Journey was better than some of the other games I played in 2012.

For those reasons however, I would also suggest that more people should play this game. It’s a breathtaking experience that isn’t too long and also simple to control. I doubt anyone would regret playing this game.

Why do I know this? I’m a self-proclaimed expert in classic Kung-Fu films.

Another fun fact: John Woo’s action-epic, Hardboiled, has one of the highest on-screen death tolls in film history.

Why do I know this? I’m also a huge fan of Hong Kong action flicks.

Do I need to further explain why I love Sleeping Dogs? Fine, I will.

Not only is the story an amazing homage to those films, but the game-play makes a great case for being this game’s primary selling point as well. United Front Games mixed the melee combat from Batman: Arkham Asylum, with the open world elements of Grand Theft Auto, and actually improved the traversal elements while doing so! I lost track of how much time I spent riding around Hong Kong on a bike, looking for the jade statues.

This game is also visually appealing. The high resolution pack for the PC version make this one of the prettiest games I’ve seen, even forcing to me save up for a new PC to replace my now deceased PS3, instead of a replacement console.

Thanks for making me spend more money Square Enix.

I’m going to get the negatives out of the way, before I start explaining why The Walking Dead is my favourite game of 2012. Technically, this game doesn’t reach any breakthroughs in game-play. It’s another point-and-click adventure game, with an added timer for important decisions.

That’s it. The Walking Dead’s biggest flaw is that the genre exists.

Yet this game seems to evoke emotions like no other game I’ve played before have. Telltale Games have provided one of the most intimate and touching stories of the last year. The game altering choices only get more difficult as the game progresses.

The Walking Dead also tackles violence in an interesting way. I can count, on one hand, the amount of times I had to use a gun. The limited use of violence forced me to think more about the few times I actually had to use a gun and whether it was the right thing to do or not. The choices made in this game were a heavy burden, and only got more difficult to make with each new episode that came out.
This was the first game where no decision was decisively correct. Each decision, however noble the intentions may be, come with its faults. Do you kill this person or keep them alive? Will this decision haunt me for the rest of the game? What will Clementine think of this?

Clementine; the moral compass of this game. For every questionable decision you make, she will be there to ask you for an explanation of it. She never allows the player to lose sight of what used to be considered right or wrong in the pre-apocalyptic society, but that also provides more depth to your conversations with her. It all feels natural, from her reactions, to Lee Everett’s evolution as a reliable protagonist.

It wasn’t just those two characters either. Every person that shows up in this game serves a specific purpose, whether it be to reveal details from the past, progress the story further, or to remind the player of what the world is like currently.

In summary, I loved this game. The game-play is simple but effective. The story forces the player to think about every action he can make in this game, and it doesn’t necessarily pay off satisfactorily in the end. I can’t say anything more than that at the risk of spoiling this game, so I won’t. Every gamer should give The Walking Dead a chance to grab their attention. They won’t  regret it.
Features journey Saturday Morning Arcade Sleeping Dogs The Walking Dead