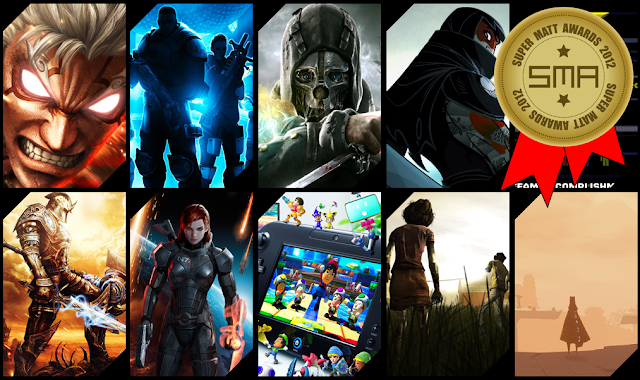 
---
Panicking, refrigerating the leftovers, yelling, and the fact that it's free made Spaceteam my number ten casual party game of 2012.

Over-the-top action, tv-style story telling, creative use of QTE button prompts, and overall surprise caused by Asura’s Wrath made it my number nine anime of 2012.

Space soap opera, 3rd person shooting, the return of Wrex/Grunt, and the end of a trilogy made Mass Effect 3 my number eight Krogan relationship simulator of 2012.

Sweet scarves, sand physics, great visuals, and running away from people trying to help me made Journey my number seven video games is art of 2012.

Chakrams, Feyblades, House of Ballads, and flashy 3rd person fighting made Kingdoms of Amalur my number five fate can deal with it game of 2012.

Great storytelling, the gray area of choices, that ending, and Clementine make The Walking Dead my number four god dammit ben game of 2012.

Mario Chase, gamepad god, Pikmin, and new experiences make Nintendoland my number three this mud is the worst game of 2012.

Whale based lore, teleporting, hiding bodies with rats, and pistol duels when I can stop time made Dishonored my number two Dish on o’ red game of 2012.

Alien noises, permadeath, satellite building, and that feeling you get when you lose a good soldier made XCOM Enemy Unknown my number one I’ll get you for this you alien scum game of 2012.