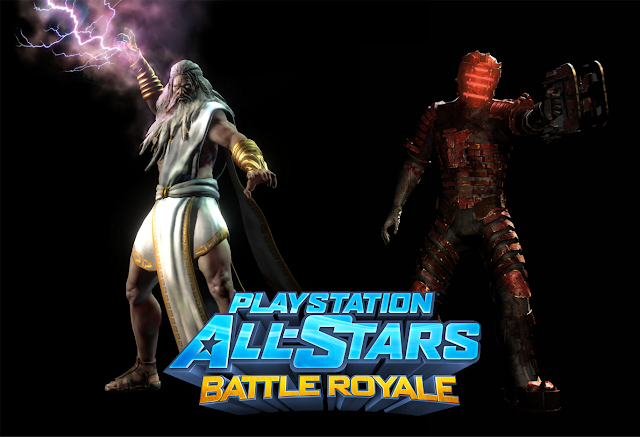 Update (02/28/13): The official Playstation Blog posted an update yesterday revealed a few more details about the next wave of Playstation All-Star Battle Royale DLC. Amongst those specifics was the price: Both Isaac Clarke and Zeus will cost players $4.99 each, while the MediEvil/Unfinished Swan mashup stage will be $2.99. Players who purchase copies of God of War: Ascension will receive a redeemable downloadable voucher code for the two characters at no extra cost. Fans interested can pick up Ascension on March 12th. Isaac, Zeus and the stage will be available for download a week later on March 19th. You can check out their respective character trailers below, courtesy of Sony.

Original Post (02/27/13): Back in January, the Official Playstation blog recommended that fans keep their eyes peeled in March for more info regarding Playstation All-Stars Battle Royale. While still a couple hours away, IGN is showcasing what players can expect downloadable content wise next month.

In terms of the game's roster, Dead Space's Isaac Clarke and and God of War's Zeus join the fray. The former is noted to be a ranged character similar to Nathan Drake and Radec while the latter is a more physical brawler comparable to Big Daddy. The two combatants are joined by a new level that mashes up the MediEvil series with 2012's Playstation Network release The Unfinished Swan. Each piece of content will be available March 19th. Fans should definitely check out IGN's coverage for exclusive video and screenshots, including a lengthy video with Sony Santa Monica's Seth Killian as he showcases all the DLC in action.

While many players are shocked regarding the announcements of Isaac and Zeus, they come as no surprise to a few fans that have followed the title closely. Back in January, NeoGAF poster TheMink teased that he caught wind of two possible additions to the Playstation All-Stars roster. He revealed that both Isaac and Zeus would appear as downloadable content with additional alternate costumes in the works. His predictions had the community split. Few gave Mink the benefit of the doubt, as he was the one who previously leaked the entire starting roster - including InFamous' Evil Cole, DmC's Dante and Metal Gear Rising's Raiden - before the beta code leak took place. Many fans however, remained skeptical. He also predicted Final Fantasy XIII's Lightning and a Musashi costume for Spike, neither ended up appearing in the game. Regardless, this appears to be another instance where random internet speculation turned out to be correct. At least it makes for a fun piece of trivia.

No prices have currently been announced for Playstation All-Star's March batch of DLC. Earlier this month, Sony released two additional characters for the game: Gravity Rush's Kat and Starhawk's Emmett Graves. Both characters were made free for the first two weeks following their launch. After that period, they became purchasable for $4.99 each. A stage that mashed up Heavenly Sword and Wipeout was also made available for $1.99.