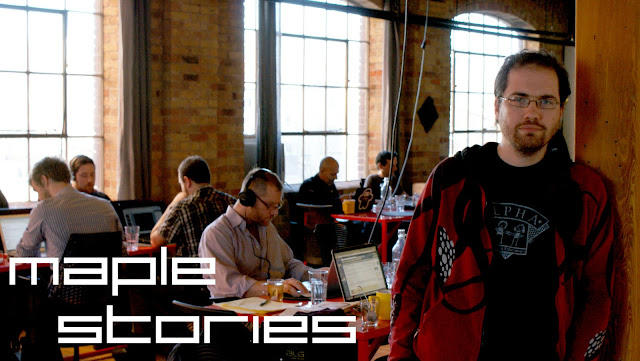 (Maple Stories is a feature that goes in-depth with various video-game developers and studios from Toronto to help get their story out to the public.)
I was setting up my equipment while waiting for Miguel Sternberg to arrive at ‘Bento Miso’ for our interview. We couldn’t do it at his office; he says it’s messy.

The first thing he does after entering this loft-like room is walk up to David Gallant, creator of I Get This Call Everyday, to catch up with him. Not long after, he is approached by Skot Deeming, who will be hosting the Vector Game Art Fest.

Sternberg isn’t afraid to talk to aspiring game designers. He travels around the Greater Toronto Area (GTA), to talk to game design students. His most recent lecture came in Oakville, Ontario and his message is simple: make games.

He understands there’s a risk with being an independent developer, but he suggests making games as a form of expression, rather than a financially stable means of living.

One doesn’t have to look far to find an example of this. As one half of ‘Spooky Squid Games,’ Sternberg created They Bleed Pixels with limited resources. The laptop he used, while on the go, had a line running down the middle of the screen. It didn’t stop him from working on this title.

Even after release, Sternberg has only just been able to afford a new laptop and a new phone. He says it’s too early to take a guess on the financial success of They Bleed Pixels; it has only been six months since the game’s release.

As we finally meet and sit down, he tells me about how he fell in love with onigiri, a rice ball wrapped or garnished with sea weed. He’s vegetarian; many other Japanese dishes were out of question for him.

Sternberg found himself in Harajuku, Japan as part of the ‘En Masse Exhibition Design Festa Gallery,’ a segment of the Toronto Comics and Arts Festival (TCAF). While there, he was introducing They Bleed Pixels to an entirely new audience. TCAF collaborated with the Kaigai Manga Fest to bring Toronto-based comics and media to an international audience.

It’s fitting that we met at a public workspace for gamers, as Sternberg has made a name, not only as the creator of They Bleed Pixels, but by being on the Board of Directors for Toronto’s ‘Hand-Eye Society,’ a videogame arts organization.

His presence in Toronto however, may be unmatched. He was one of the primary facilitators of the ‘Comics vs. Games’ event for the TIFF Nexus, putting five independent comic book artists with five independent game developers together to create unique exhibits.

At least that’s the conclusion I came to. Listen to the interview below.

This audio has minimal edits, and so it is his story, in his own words.