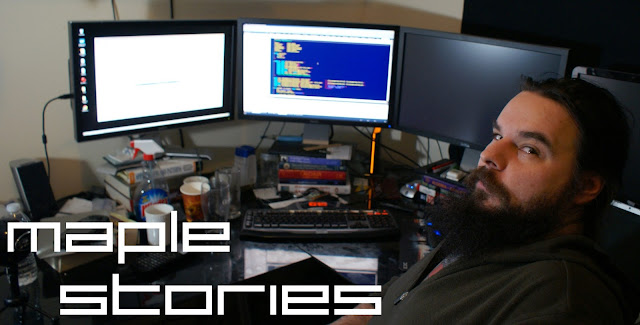 (Maple Stories is a feature that goes in-depth with various video-game developers and studios from Toronto to help get their story out to the public.)

I pulled into a driveway on a snowy February afternoon, where I would be talking to Shawn McGrath, best known for his critically acclaimed title, DYAD.

“What kind of person would I be meeting?” I wondered. Then I looked to my left where a car, many years behind it, had a license plate that read, ‘H4XOR.’

McGrath has been creating video games, he says, since he was 11. He decided to make a career out of it in 2006. In November of that year, he released his first game, I Have Big Balls (IHBB).

In 2007, McGrath created XIQ for the TOJam. It took three days to complete this game. The title is a reference to the arcade game, Qix and required the player to create rectangular boxes to trap and destroy enemies. It was voted the best game by the community.

He was accredited with the same honour in 2008, when he developed A Game About Bouncing. In this game, a player has to hit as many balls as possible while avoiding the equivalent of a seeker missile. One of the few ways to bounce from ball to ball was a grappling mechanic, which can also be found, albeit altered, in DYAD.

His most important, and successful, project to date was DYAD. It came out for the Playstation Network on July 17th 2012, and has been one of the highest rated Playstation games since. McGrath realized, while working on a remake of XIQ, that he wanted to create a tunnel racing game instead. He created a program, with lines and circles, titled Something. It wasn’t meant to be seen by the public, so the name didn’t matter.

This program was created on a flight back from a Game Developers Conference, and ended up being one of the precursors to what DYAD eventually became.

As I entered his house, there were boxes of baby supplies spread around. He is going to be a father in a few weeks, he says, and this is preparation for that. Once again, I asked myself, “Who is Shawn McGrath?”

He prefers the National Football League (NFL) over the Canadian Football League (CFL), because the latter is more strategic and hence, unpredictable. He also believes this unpredictability does not exist in the traditional form of storytelling.
He believes that DOTA is one of the better examples of storytelling in games. The strategic planning required, during each move, creates a new branch of the story. That branch could end up being more important, depending on which moves we make. As a result, each game of DOTA can be different from the next, creating a certain level of uncertainty and spontaneity in each story. He wants to explore this in his next project, a Role Playing Game. McGrath calls this the, “Granularity of Interaction.”

I finished the interview and was packing up, and I was still wondering, “Who is Shawn McGrath?”
It wasn’t until I began editing this interview that I realized Shawn McGrath is the same guy who bought a “H4XOR,” license plate as a teenager, and who titled his first game, I Have Big Balls. He doesn’t take himself too seriously, but holds an educated opinion on every facet of game developing.

McGrath is the same guy who prefers to run a small company because he prefers to make whatever type of game he pleases. It’s more about the game, than it is about the money. This is why he was able to release DYAD.
At least that’s who I think Shawn McGrath is.

Listen to my extensive interview with him. It’s in two parts, and has minimal edits. If the written portion is in my words, the audio interview is about him in his words.