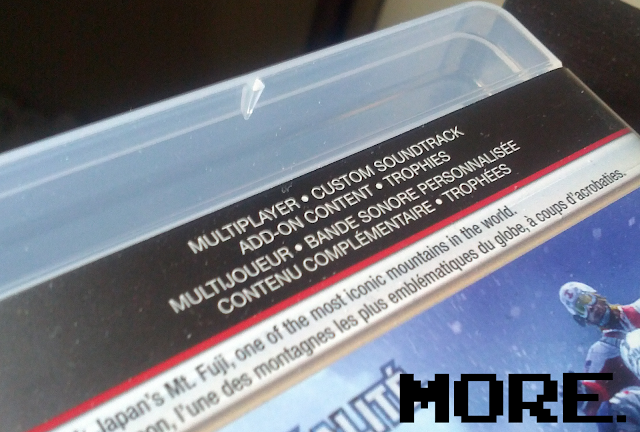 I've been playing a lot of Midnight Club: Los Angeles (MCLA) recently, in an attempt to quench my recent thirst for racing games. While cruising around its virtual streets, I began to notice that the game felt dated; granted, the game came out in 2008. While the roster of vehicles only went as so far as the year of its release, that wasn't what was producing the feeling. This is mostly because modern racing games pride themselves in showcasing vehicles that span the past six decades and honestly, I can't really tell the difference between car models of the last ten years.

It was through listening to the game's soundtrack that this sense of familiarity rose. As I began to compile my custom playlist out of its in-game soundtrack, I couldn't help but notice that I had a lot of these songs on high rotation a few years back. Rockstar Games has the ability to compile amazing setlists that perfectly capture the time period/theme that they are trying to present. Grand Theft Auto: Vice City and Red Dead Redemption are often praised for their tone setting soundtracks. In the case of MCLA, they were able to capture the modern day west coast atmosphere… of 2008. 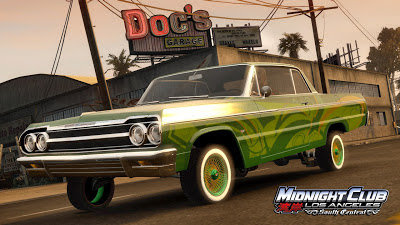 (via Rockstar Games)
It’s something I've been noticing more and more in games that utilize licensed soundtracks. Usually reserved for sports and racing titles, their soundtracks set the tone of that year's instalment while, perhaps unintentionally, capitalizing on the latest music trends and artists.

In the last year alone, many games began to pump their licensed soundtracks with songs of the Electronic Dance Music (EDM) and Dubstep genres (or brostep for all the purists out there). Both Forza Horizon and SSX soundtracks were majorly composed of artists that are currently taking the music scene by storm (see figure 1).

A problem will arise however when the popularity of EDM will begin to decline. The game-play and settings found in Forza Horizon and SSX are timeless. I can easily find myself picking up the two a few years from now and having just as much fun as I'm having today. The disconnect will stem from listening to their soundtracks. Not only will new EDM songs and artists emerge, but the genre itself may have been surpassed by another in terms of mainstream appeal.

It’s hard to properly immerse yourself in a modern day setting when the music playing around you isn't that modern. That's not to say that this is a game breaking problem—these are still quality experiences. I feel that a way for licensed soundtracks to retain a modern feel is to allow the user to import their own custom soundtracks. 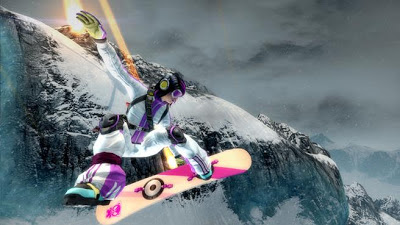 (via EA Sports)
By importing your own custom soundtrack you essentially have a product that could just as well have come out the day you play it. Custom soundtracks act as a fountain of youth. It is as if your mind is being tricked into thinking a title is newer, due to the fact the sounds you're currently hearing are just as recent.

Or maybe “fresh” would be a more appropriate term. When you think about how a game is constructed (barring additional downloadable content) you are essentially locked/confined to the world that is shipped. The landscape doesn't change; neither does the character you play as. By extension, a licensed soundtrack forces players to listen to the same set of songs repeatedly. It's this lack of change that makes games feel not only dated but closed off. They exist in this bubble which it can never escape.

By adding new songs to the soundtrack, you're updating the game. No longer is it confined to this bubble, but has the ability to change, to be updated. To me, it's as if the game can actually breathe.

I know what you're asking though. Don't you come to the same result when you mute the sound and play music from an outside source? While that is certainly a viable alternative, the music doesn't interact within the game's structure. It plays over the title's sound effects rather than coexist in line with them. Though the same result is technically reached, the game itself isn't technically being updated and thus remains in this fictitious bubble.

Pseudo existential crisis dribble aside, there exist game-play benefits in custom soundtracks. It allows the player the opportunity to create a more enjoyable game-play experience. It’s possible that a player may not like a game's licensed soundtrack. This can be due to them not being fans of the songs/artists/genres, or feel that it doesn't lend itself to the in-game atmosphere. By having the ability to import their own songs into the game, the experience is tailored to their preferences. 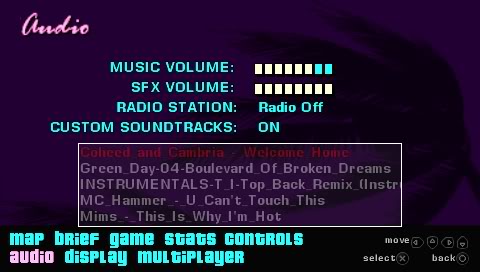 (via NeoSeeker)
Games that utilize licensed soundtracks typically have its players repeating the same actions over and over again. While this is true of all games in existence, there is a difference between the repeat actions of a RPG to a series of races, or playing multiple games in a season mode. In these instances, retries become inevitable. Say you're trying to attain a certain score, or race time yet are unable accomplish that feat. I've seen many instances where players have voiced frustration over the same songs that were on loop during these ordeals. It's as if the game was further taunting them.

It's an experience that has happened to me. I'll even go as far as admitting that I cannot stand certain songs due to the memories of countless retries that I have attached to them. With a custom soundtrack, constantly retrying doesn't sting as bad. Not only are you playing to songs you actually enjoy, but a greater variety of songs means the same seven or eight aren't there to add insult to injury.

I feel that SSX's use of custom soundtracks have spoiled me in that way. It was integrated well into the game's world and guarantees that the title will feel fresh every time I do decide to pop back in. I can't say the same for titles like MCLA or Skate 3. As much as I love the game-play being presented, listening to the same songs over and over again becomes a little tiresome. In the end, isn't that why custom soundtracks are needed in these games? Not because of the game-play benefits or the fact that games can't breathe? The custom soundtrack helps increase the time it takes for a game to feel stagnant. Considering that I don't buy as many games as I used to, it’s an interval that I’d like to prolong as much as possible.