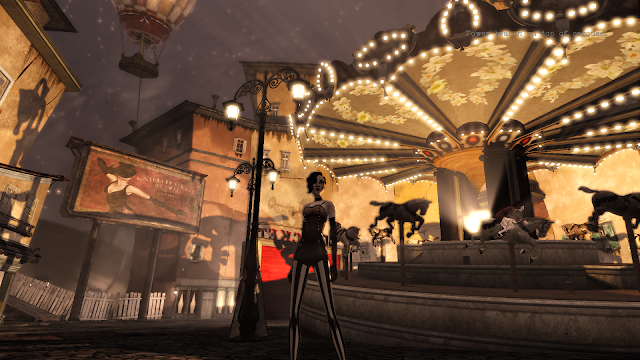 
It has been just over a year since Montreal Studio, Compulsion Games, introduced their shadow jumping puzzle game, Contrast. They’ve been at work on this game for far longer, with the development surpassing four years in total. PAX East 2013 was the first time they had a playable demo available for the public.

Contrast stars Dawn, the imaginary friend of a 9-year-old girl named Didi. Didi has an unstable family. Her mother is a cabaret singer and her father is a deadbeat, when he isn’t absent from her life. As she follows her mother around town, Dawn helps her get from one part of the town to the next, jumping through shadows in order to do so.Dawn also has the ability to revive a past event in the form of a silhouette.

Since the game's announcement last year, Dawn has had a significant overhaul in design. Portrayed as a lady with short, blonde hair in the reveal trailer, she is now a mysterious and pale looking figure with dark hair.

Easily the best part of the game is its presentation and level design. As the title may suggest, the dimly lit backdrop serves as a contrast to the portrayed innocence of Didi. The moments when there is more colour stand out as a result of this.

The shades of brown that coat the cobblestoned roads and buildings adds a bit of mystery to this world, constantly keeping me intrigued throughout the demo. There are some parts of the game that are completely covered in this shade though, and I am hoping this isn’t the case for extended periods of time throughout the game.

The switch from the regular world to the shadow world looks and feels natural, and it does help with the platforming elements when proper timing is required as well.

The platforming is promising and is highlighted by the unique puzzles that are created by items in this game. In one demo level, while Dawn is going towards the Ghost Note theatre to meet Didi, she comes across a shadow that resembles a Ferris wheel. This wheel was created by the wheel and pedals of a bicycle turned upside down.

The controls are simple, but serviceable. To phase into the shadows, the player must push the ‘Right Trigger,’ button, which will put a grey coat over the world. The shadow world works as a 2D platformer, with Dawn having to maneuver through the shadows created by several objects.

If there is one issue with the game-play, it is that Dawn can get trapped in certain parts of the shadow world. This could just as likely be an issue on my end, as I haven’t had a chance to play this game for a long time, though I can only answer that upon the game’s release.

For its first demo, Contrast did a terrific job of introducing this world, along with its characters, to me. While I hadn’t had a chance to research this title before PAX East 2013, it is certainly a game I am looking forward to playing.

Contrast has gained the required amount of votes on Steam to get Greenlit. It is slated for release in May and will cost $15.
Compulsion Games Contrast Features PAX PAX East