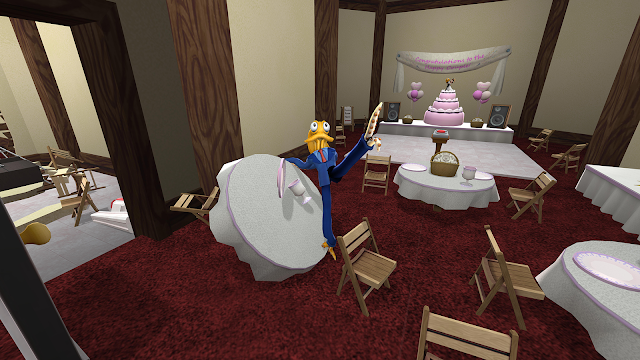 Octodad: Dadliest Catch is the sequel to the original, student project simply titled, Octodad. The goal of the game is to hide your identity from your family by being as loving as possible. The tasks can be as simple as mowing the lawn, or looking after your kids. Sounds simple right?

“The thing is you’re an octopus, you have no bones and you’re flopping all over the place, breaking things,” says Phil Tibitoski, President of Young Horses Inc.

To control Octodad, the player must control both feet and both hands separately. Hold down the right mouse button and move the mouse in a direction for the right foot or hand; likewise with the left hand and foot, but with left mouse button.

“[It’s] somewhat like a 3D QWOP, in that you manipulate all his limbs independently,” Tibitoski continued.

Tibitoski was quick to mention however, that the games only have the control idea in common, saying, “It’s not supposed to make you feel like you’re the worst.”

The artistic direction is something, Tibitoski says, they followed their gut instinct on. He wants the game to be funny, entertaining, and sometimes vague in their explanations.

He says, “People ask us, ‘how do they have children?’ and we’re like, if your parents didn’t explain it to you, we aren’t going to explain it you.”

There are a few similarities between the original, free-to-play version, and its sequel. This begs the question, what’s different?

“The first game’s art style is actually quite different from this new one in that we used a lot of close-ups of other objects,” he says.

The story will also be different, and more expansive to include new locales. The controls are undergoing fine-tuning and there will be, according to the website, new physics introduced into the game as well.

Young Horses started off as a group of 18 students, part of the DePaul Game Experience 2 (DGE2), who wanted to have Octodad ready for the IGF Student Competition, which they eventually won. After much debate, eight of the students decided to make their game larger, and more ambitious.
Six out of the eight members of Young Horses are working on this in their spare time, while juggling full time jobs.

They launched a Kickstarter for Octodad: Dadliest Catch, which successfully gained them $24,320.

“We’re hoping to have this one done by late [2013],” Tibitoski says. The game will be available for PC, MAC and Linux. The game was recently Greenlit for Steam. No price has been settled upon, though there will be about four hours of game-play with some bonus additions.
Dadliest Catch Features Octodad PAX PAX East Young Horses Inc