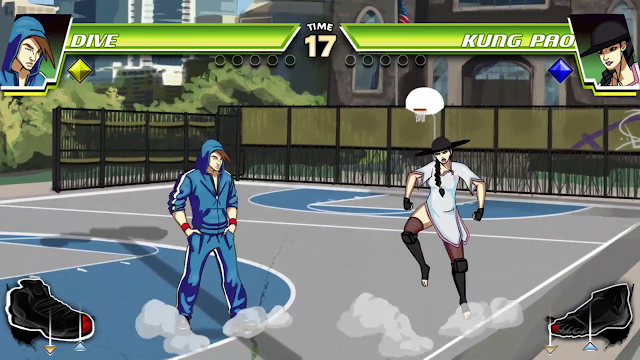 They were born and raised in West Philadelphia, where they used to chill out at the playground a lot. One fateful day, the fraternal twin brothers got into a fight and their mom said they’re moving to Bel-Air, to live with Uncle Sensei.

Of course I’m talking about Divekick.

Divekick was one of the most popular titles on the show-floor at PAX East 2013, but its origins are much smaller.

“It was a late night joke,” says Adam ‘Keits’ Heart, the creative mastermind behind Divekick. He was hanging out with a friend, when he suggested the idea of a game featuring Dive and Kick, with controls to dive and kick.

“I didn’t even know he was a coder,” Heart continued. Once he had his friend’s coding expertise, he decided to wake up his fiancée early morning and ask if she wanted to design the game.

Divekick uses two buttons to do everything. The player will never use the analog stick to move, or have to worry about executing complex combos that are one of the most vital elements of a fighting game.

“You have to use the tools given to you, by jumping into the air and kicking forward,” Heart says of the movement. To move backwards, the player has to kick the floor with enough power to move backwards.

Each fight is a race to five wins. It’s also a sudden-death format, with one hit being a victory. Getting a head-shot on a person will stun them for the next round. The controls sound easy to pick up, but it’s the timing of the jumps and kicks that is important.

“I think the game is very easy to play, but very difficult to master,” Heart says of game-play. It’s more about figuring out the opponent’s pattern than it is about chaining together a series of punches, kicks and takedowns into a special or ultimate move.

“It’s much easier to learn to pound out a combo everytime you hit a guy, than it is to learn how to read his mind,” Heart says.

“If I learn how to read your mind, after we play a 100 games, what about the next guy?”

It’s that psychological aspect that Heart believes will appeal to professional and amateur fighters alike.
Heart says, “If you’re the type of person, who can lose at a game like this and [ask], ‘here’s why,’ then every time you play, you’ll get better.”

Just don’t beat your opponent five times in a row, as that will label you a fraud (Yes, I got swept by Adam Heart). The fighting community should know what I’m talking about.

Like many aspects of this game, Divekick’s story is more a nod to pop culture from the past than a serious tale of adventure, triumph and any other trope. Dive and Kick are fraternal twin brothers. Dive is Asian and loves math. Kick is black, and really likes rap music and ladies. Their mom is white. Uncle Sensei is a ten time world Divekick champion. Redacted, another playable character, is Uncle Sensei’s rival who keeps stealing his cigars. Uncle Sensei really likes his cigars you see.

Development on Divekick started in November 2011, with a prototype being finished for May 2012. The Kickstarter launched on July 2nd 2012. While Heart and his team, One True Game Studios, reached their financial goal, they decided to cancel the funding a day before the official deadline for it.

“We asked for $30,000 for the game which, honestly, is like a flash in the pan; that’s nothing,” Heart says. His drive to create the best game he can, with his abilities, meant teaming up with Iron Galaxy Studios instead.

Heart reassures, “We’re still honouring a lot of the backers’ pledges, so if we offered you a little something on Kickstarter, we’ll hook you up.”

Adam Heart isn’t an amateur to professional gaming himself. Going by the name Keits, and having competed in multiple fighting game tournaments, his biggest accomplishment was finishing in the Top Eight at EVO.

“And what I’ve found, over the years, is that I much, much, much more enjoy watching people play my games, than I enjoy playing any game. It’s what I’ve always wanted to do, and now that I’m doing it, it’s very fulfilling.”

There is one more thing Heart can be satisfied with—the fan reaction. While I was fortunate enough to speak to him on the first day of PAX East 2013, there wasn’t a single moment over the next two days where the booth was empty.

Divekick is expected to be out by Summer 2013. There will be more characters and levels revealed soon. The PAX East 2013 demo was running on the PS3, though the game is slated to come out for PC as well.
Adam Heart Divekick Iron Galaxy Studios Keits PAX PAX East