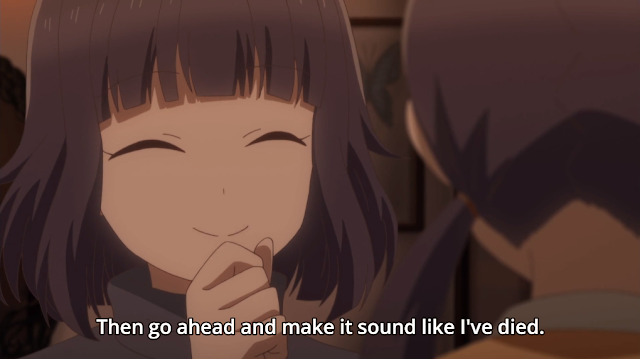 Greetings friends and welcome to The Mistake Zone.

With the anime summer season approaching the home stretch, unfortunately due to unforeseen circumstances, the Saturday Morning Arcade boys have been unable to fully sit through and record entire episodes. Sadly it looks like this trend will continue and we'll be on hiatus for a bit.

We're hoping to return in a few weeks with a summer send off episode before we buckle down and explore Fall season 2019.

Until then, here are some quick notes I've jotted the last two weeks to leave all our pals with some sort of content:

Hensuki: Are You Willing to Fall in Love with a Pervert, as Long as She's a Cutie? - Episode 8

I loved how this episode was able to showcase Keiki's sister Mizu as the straight woman character. While we had our reservations during episode one that this might lead to some brother/sister territory, this episode (hopefully) establishes that there are no real romantic feelings there. Keiki being able to vent to his sister, and in turn Mizu being able to walk in on her brother and the potential Cinderella candidates made for a fun episode.

Though if I had to be honest, my favourite part in this show was Keiki, Shoma and Koharu talking together in the astronomy club, with the latter two just non-nonchalantly trying to clean up all of Koharu's stalker pics.

As an avid fan of FRIENDSHIP, to see all these characters come together and have a meeting regarding Keiki's ongoing dilemma was something I really appreciated. It again establishes Shoma and Koharu as support characters to the harem protagonist while still allowing their own quirky traits to be shown.

I really liked the hot spring scene in episode 8. Are You Lost is essentially the three girls out of their element with Homare as their anchor. To me, the hot spring scene is Homare out of her element, not being able to relax while constantly trying to analyze everything. Mutsu pointing out that Homare looks happiest when she find a new tool for survival especially highlights that point.

In episode 9, I really liked the dad complex angle in that, Homare is able to reflect back on all his teachings and try to relay them back in an understanding way in order to comfort her friends. Her trying to take this motherly role while still making herself seem as their equal is fun to watch but given how awkward Homare can be, she doesn't connect as much as she believes.

How Heavy Are the Dumbbells You Lift? - Episode 8, 9

I loved the introduction to Aina and Kura as side supporting characters. The line "Though they'll probably show up here from time to time" got me good.

Episode 9 however with Barnold Shortsinator though? Magic. Everyone's shirts ripping off when Machio posed will go down as one of my greatest anime moments of the year.

If there's one thing I loved about this episode is how in your face it was. This episode played out the same way - set up something super serious, then break it down with comedic relief, sometimes doubling down on the comedic relief. It’s the perfect way to describe this show: serious work out tips, with a fun slice of life wrapping

It plays on the expectation that - these shonen body types should be in more serious settings, yet its so quick to remind you that this is all for fun

That goodbye handshake between Kunai and Angel White in episode 8 looked like dogshit.

For episode 9, I liked how Aku, Tron and Luna have been delegated to background characters for the most part. The bunny girls had more screen time than them.

So here's my issue with the political aspect throughout Episode 18: we don't really see any of the characters reacting to this (aside from Spencer and Kyle somewhat) and there aren't much implications or consequences to our major characters.

While I appreciate that the show highlights the girls concentrating on their careers and immediate goals, the Valerie stuff just feels like it gets in the way since at best its contributing a reason for Tuesday to interact with Kyle. You would think that due to Carole's history with being a refugee the two girls would touch on it, even a bit. But they really don't.

The Tao stuff can definitely lead somewhere but as of right now it's a lot of set up. It's impactful just because of how topical it is, how we can force our societal meaning onto it for it to be social commentary. But in the context of the show it's really just there to build up to a moment but that build up is taking a while.

Latina is becoming one of my favourite written characters of the year. Though it can feel jarring, her being upset and fixated on something one episode (demon aging, her being bad, etc) and then her mentally coming to terms with it the next episode is so wild to me.

With Latina, she's forced to grow up the more she tackles the adversity that comes with being a demon among these human settlements. And it creates this… uneasiness within me at least, since I think I'm fixated on the fact that, things can go to shit at any moment.

To have Latina come to terms with a lot, and try to do right by her developing beliefs has been quite the ride.

The current Momo storyline is actually pretty compelling to me. The idea that Momo is trying her best to make up for her dwindling magic, but in turn is notably pushing herself harder and harder may seem cliche but it sets up a lot of growing room for Yuko.

The addition of Mikan, the unfortunate magic girl adding to this straining is great. Down the line, I can see Yuko really being put to the test of trying to save her friend. Coupled with the fact that Momo can dematerialize can set up a situation where Yuko does have to sacrifice something to keep her alive and I can't wait to see how she reacts.

Lily goes from a C-tier character to at least an A-tier one.

Honestly Dr. Stone gets notably better when you don't have buttfuck Tsukasa being boring as hell.

Maybe it's because the post apocalyptic media I've consumed mainly focuses more on war and man being a monster. It's what I'm use to. To see Senku try and make medicine, a very important aspect for the post apocalypse, is an aspect I've never really seen the genre touch and it is refreshing to watch.

The show itself is introducing a lot more fun characters than the typical I'm really strong but also more of a dictating asshole. Asagairi Gen is a fun character I can't wait to see more of. He has the potential to be a really great antagonist or even anti-hero just with how straight up he is regarding his values. Dropping "whether you die, or Tsukasa dies, doesn't matter to me. I'm going to win, no matter who I have to dispose" really sold me.

Do You Love Your Mom and Her Two-hit Multi-target Attacks - Episode 7, 8

Medhi arc was way too long and essentially ends the same way as the Wise arc.

This episode was brutal. Between Tamaki getting the shit kicked out of her and her crying throughout the end scene, the mother being injected right before her daughter and Ta-kun getting injected as well, Fire Force spared to expense at making you just dislike Rekka.

I wanted to thank them for having Rekka getting some comeuppance at the end of the episode and not having to wait an entire week for it.